Ford Recalls 400K Transit Vans Over Driveshafts That Could Detach 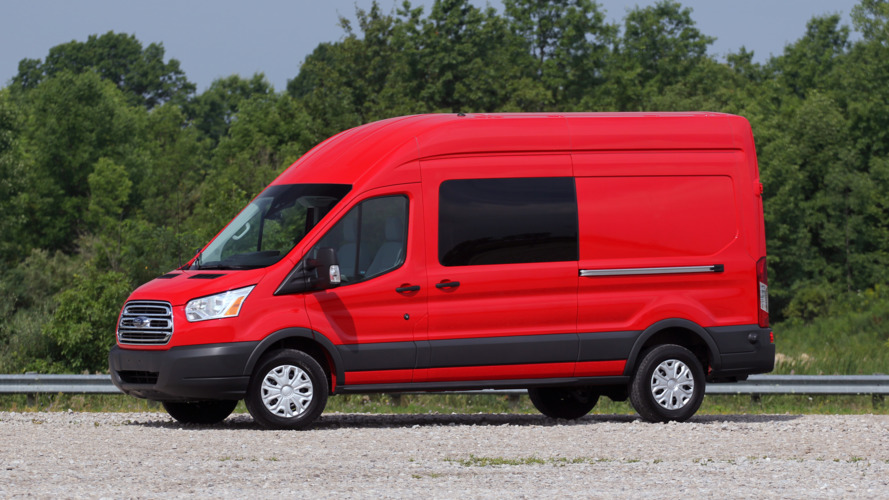 The company also announced two other recalls: one for the Police Interceptor Utility and one for the Escape.

Ford has issued a trio of recalls, although two of the campaigns affect vehicles in the single digits of units.

The largest of the bunch affects 402,462 examples of the 2015-2017 Ford Transit in North America, including 370,630 of them in the United States, 26,254 in Canada, 3,217 in Mexico, and 2,361 in federalized territories. The campaign specifically covers the van/bus variant in medium-, long-, and extended-wheelbase bodies, plus chassis cab/cutaway versions with the medium wheelbase. These models were made at the Kansas City Assembly Plant with production dates from January 17, 2014, to June 15, 2017.

Ford needs to replace the flexible driveshaft coupling in these vehicles. The current part can crack and cause the driveshaft to separate from the vehicle. This would cause of complete loss of drive power on the road, and the Park gear also wouldn’t work. Drivers would need to use the parking brake to keep the van stationary. Plus, the driveshaft separating from the transmission can cause damage to surrounding components like the lines carrying brake fluid and fuel.

Ford has no reports of accidents or injuries from this problem. The Blue Oval believes that the current flexible couplings wouldn’t deteriorate before the vehicle reaches 30,000 miles.

At this time, Ford doesn’t have a final repair for this problem. Until a complete fix is ready, the Blue Oval intends to replace the driveshaft coupling every 30,000 miles. The company believes one of two solutions should eventually fix the problem: either a redesigned flexible coupling with a modified driveshaft bracket and shield or a revised driveshaft equipped with a universal joint.

Separately, Ford is recalling four examples of the 2017 Police Interceptor Utility in the U.S. because the second-row seats might not have an inboard attachment point. In a crash someone back there might not have the proper amount of restraint and injuries could be more likely. The company knows of no accidents or injuries from this issue.

Finally, the company is recalling three units of the 2016 Escape in the U.S. to replace driver knee airbag modules. Upon deployment, the current parts might not inflate fully. The company knows of no accidents or injuries from this issue. Dealers will replace the components.

Ford is issuing a safety recall for approximately 400,000 2015-17 Ford Transit van/bus vehicles with medium, long and extended wheelbases and chassis cab/cutaways with medium wheelbases to replace the driveshaft flexible coupling.

In the affected vehicles, continuing to operate a vehicle with a cracked flexible coupling may cause separation of the driveshaft, resulting in a loss of motive power while driving or unintended vehicle movement in park without the parking brake applied. In addition, separation of the driveshaft from the transmission can result in secondary damage to surrounding components, including brake and fuel lines. A driveshaft separation may increase the risk of injury or crash.

For affected vehicles with more than 30,000 miles, the interim repair will consist of replacing the driveshaft flexible coupling every 30,000 miles until the final repair is available and completed. Owners will be notified by mail and instructed to take their vehicle to a Ford or Lincoln dealer to have the flexible coupling replaced immediately at no cost. When the permanent repair is available, owners will be notified that they may schedule an appointment with their dealer to have either a redesigned flexible coupling with a modified driveshaft bracket and shield or a revised driveshaft equipped with a universal joint installed at no cost.

In the affected vehicles, seats with missing inboard attachments may not adequately restrain an occupant in a crash, increasing the risk of injury.

The recall involves approximately four vehicles in the U.S. The Ford reference number for this recall is 17C10.

Dealers are contacting owners to schedule service appointments to inspect for the presence of the second row seat attachment studs and repair as required.

In the affected vehicles, in the event of a driver knee airbag deployment, the airbag cushion may not inflate as intended due to the lack of inflator gas generant material. Incomplete airbag fill during a commanded deployment may increase the risk of injury to the driver in a crash.

The three associated Ford dealerships are in the process of contacting the three vehicle owners to schedule service appointments to have their driver knee airbag replaced at no cost.