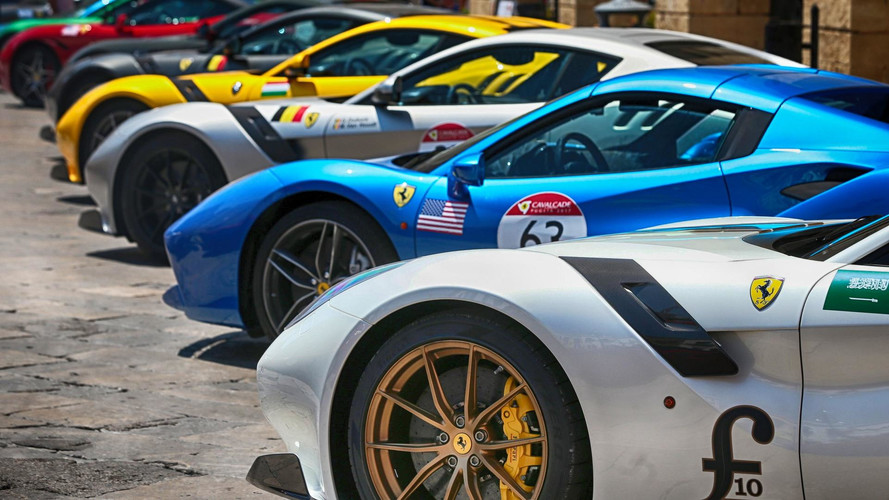 The only thing better than a Ferrari? 100+ Ferraris.

Ferrari is in a festive mood as 2017 is the year the peeps from Maranello are celebrating their 70th anniversary. The stunning LaFerrari Aperta is the model that symbolizes the brand’s milestone and it was part of the convoy during the sixth edition of the Ferrari Cavalcade. If this is your first time hearing about this event, it’s being billed as a “traveling show” reserved only for the “most loyal customers and collectors.”

More than 100 cars owned by people from over 30 countries gathered at the starting point at Borgo Egnazia in Italy and then drove through the nearby scenic routes, tackling the narrow streets of the villages to the delight of bystanders. Most of the Ferraris registered for the 2017 Cavalcade were recent nameplates, such as the 488 Spider, California T, F12tdf, and the GTC4Lusso. The cream of the crop was represented by the iconic trio: F40, F50, and Enzo, with the aforementioned Aperta being the cherry on top.

There’s no word about Ferrari’s latest model, the 812 Superfast, but that doesn’t really come as a big surprise since the marque’s most powerful and fastest regular production model ever was unveiled only a few months ago.

The company is not resting on its laurels as work is already well underway at a new model, though its identity is hard to pinpoint at the moment. Spy shots have shown an intriguing 488 with the engine bay window covered. Latest intel suggests it’s a KERS-equipped beefier 488 or perhaps a test mule for a V6-powered Dino reboot.

Later this year, RM Sotheby's will also celebrate Ferrari’s 70th anniversary by organizing what it describes as being the biggest Ferrari auction ever. It will be organized between September 8 and 10 right in the heart of Ferrari — in Maranello.

The sixth edition of the Ferrari Cavalcade – a “travelling show” of over one hundred Ferraris coming from all over the world – took place in Apulia from 21 to 25 June. The event is restricted to the most loyal customers and collectors, who share their passion for the Prancing Horse by visiting some of Italy’s most beautiful areas every year.

The “base camp” of Ferrari Cavalcade was at Borgo Egnazia, in the Savelletri countryside that straddles the Brindisi and Bari provinces. From there, all participants drove along scenic routes in their Ferraris, meandering through villages and cities of art. The programme combined Mediterranean charm and sheer driving fun, and gave the opportunity to celebrate the 70th anniversary of Ferrari.

The list of over 30 Countries the participants come from is a testament to the brand’s global appeal: all five Continents were represented, all sharing the same passion for Ferrari.

The Ferrari models registered for the event are mainly recently-manufactured ones: from GTC4Lusso via F12tdf and California T through to 488 Spider. The “jewels in the crown” included some special limited series, such as the F40, the F50 and the Enzo. LaFerrari Aperta – the iconic car that symbolises Ferrari’s 70th anniversary – also attended.