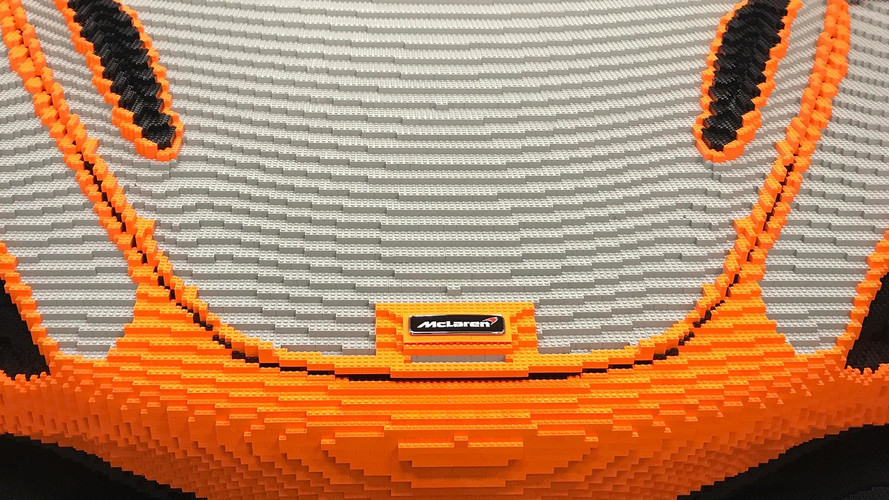 Lego’s automotive kits are cool enough from the simple Speed Champions line to the giant Porsche 911 GT3 RS, but McLaren intends to give the toys a major upgrade at the Goodwood Festival of Speed by displaying a 1:1 scale model of the 720S. The giant, plastic car required more than 267,300 plastic bricks, and six people needed over 2,000 hours to build it.

The life-sized Lego 720S isn’t done yet, though. McLaren is asking visitors to the Festival of Speed to add the final pieces to this plastic supercar. There will still be quite a bit of work to do because the British sports car will bring over 12,700 (mostly orange) bricks to complete the construction. The design will even include depictions of the Pirelli P Zero Corsa tires with the appropriate silver markings.

The final Lego brick vehicle will weigh around 3,530 pounds (1,600 kilograms) in part due to an internal steel frame for maintaining the structure, which will still be significantly more than the production 720S’ 2829-pound (1,283-kg) dry weight.

McLaren worked with its contacts at Lego to come up with the blueprint for this giant model. The crew at the Danish toy company used CAD data of the 720S and provided the automaker with the plan to build it.

Build your own full-size LEGO® McLaren 720S at Goodwood

One very special McLaren 720S is set to make an appearance at Goodwood, swapping its usual aluminium and carbon-fibre structure for bright orange LEGO® bricks.

Following on from the launch of the 75880 LEGO® Speed Champions McLaren 720S miniature set, McLaren’s all-new supercar will be fully realised in LEGO® form at the Festival of Speed.

But there’s a twist.  The 1:1 scale model will arrive at the Goodwood stand incomplete.  In order to finish the build, visitors to the McLaren stand will need to place orange McLaren bricks in designated parts of the car, with the 720S reaching completion by the Sunday at the end of the Festival of Speed.

Just preparing the car for Goodwood has required more than 267,300 LEGO® bricks, with McLaren fans visiting the stand expected to add over 12,700 to completely finish the build.  The end result will be a full-size LEGO® 720S weighing in at no less than 1.6 tons; more than the road-going 720S’s 1283kg lightest dry weight.

In order to produce such an accurate representation of the 720S, McLaren Automotive worked closely with the Speed Champions LEGO® team based in Billund, Denmark, providing in-depth vehicle CAD data so that the model could be fully realised.

The model was built up around a steel frame, with a team of six working for over 2,000 hours to build the car by hand. For comparison, a real-world production 720S takes around 12 working days in the McLaren Production Centre to assemble.

The McLaren 720S is available to order pre-assembled, with prices starting at £208,600.