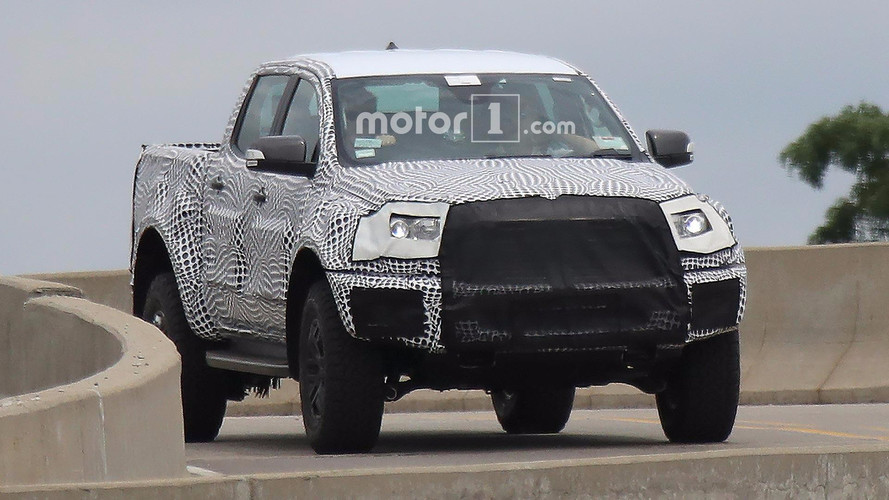 Ford could probably sell hardcore Rangers by the truckload.

New spy shots from Ford’s Dearborn, Michigan, proving grounds indicate that the Blue Oval has a hardcore version of the Ranger under development that would be the natural competitor to the Chevrolet Colorado ZR2. Without knowing for sure what Ford would call this performance-oriented midsize pickup, the Ranger Raptor moniker fits the truck very well for the time being.

This test mule wears a lot of camouflage, but many of the changes over the standard Ranger are visible. This truck has a larger grille that should look mean and feed plenty of cool air to whatever the Blue Oval fits into the engine bay. The fenders seem a little broader, too. It also appears to have a taller ride height than previously spied North-American-market Rangers.

At this point, the Ranger Raptor’s powertrain is a complete mystery. To allow enough market differentiation with the F-150-based Raptor, it doesn’t seem likely that Ford would fit this model with the high-output 3.5-liter EcoBoost V6. An interesting possibility would be using the 2.7-liter EcoBoost V6. In the latest upgrades for the F-150, the powerplant now makes 325 horsepower (242 kilowatts) and 400 pound-feet (542 Newton-meters) of torque. Those figures would absolutely crush the most powerful ZR2 with 308 hp (229 kW) and 275 lb-ft (372 Nm) of torque from a 3.6-liter V6.

Expect Ford to pair the engine with its 10-speed automatic gearbox and a sophisticated four-wheel-drive system. The Blue Oval would need to fit a high-tech suspension to challenge the Multimatic Dynamic Suspension Spool Valve dampers from the Chevy ZR2.

The standard Ranger arrives in 2019, but Ford likely wouldn’t want to overshadow the much-anticipated model’s debut by bringing out the Raptor variant at the same time. The standard product strategy would indicate that the hardcore model should come a few months or a year afterward. The timeframe should provide plenty more opportunities to spy this truck’s development, and we can't wait to see it.