Hardcore Jaguar XE Spied, Could Be The SV Project 8 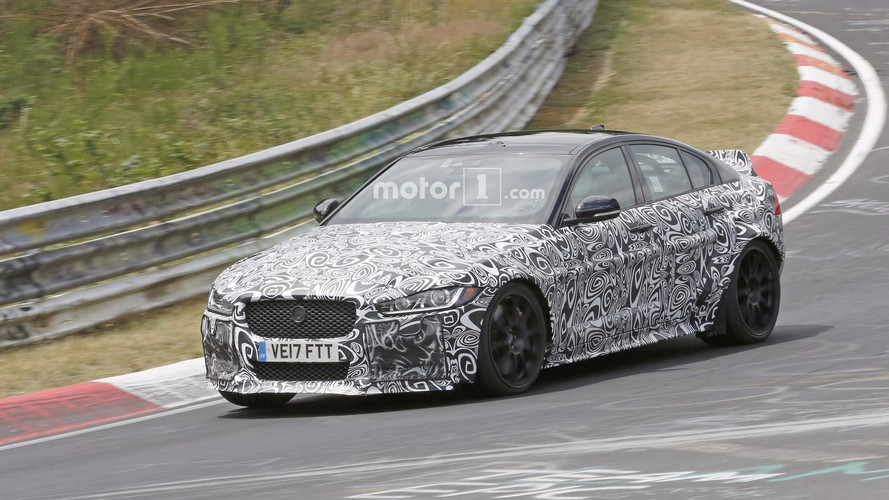 Or could this be the future XE SVR?

It’s officially a Jaguar Land Rover day here at Motor1.com. Earlier today we reported about a Corvette-powered Defender, a new 2.0 turbo engine for some Jags, a prototype of the I-Pace spied testing, and Rowan Atkinson’s fantastic Defender for sale – and now we have even more intriguing news about the British manufacturer.

More about the XE SVR:

This time, our spy photographers have managed to capture sporty prototypes of the Jaguar XE testing somewhere in the United Kingdom and on the Nurburgring. Covered under solid camouflage, the mules feature different front bumpers with two large air intakes and a lip spoiler, and a massive fixed rear wing. Large OZ multi-spoke black wheels are hiding bigger brakes, while the fenders appear to be widened to fit the bigger tires.

While we can’t be entirely sure, these could be test prototypes for the upcoming XE SV Project 8. Set to be revealed at the Goodwood Festival of Speed later this month, it’s about to become the most powerful production Jaguar ever with 600 horsepower from a 5.0-liter V8 engine. There are certain similarities between the photographed prototypes and the car Jaguar teased last month, like the aggressive front bumper and the wider fenders. However, many other components, such as the rear wings and the side sills, appear to be significantly different.

The British manufacturer has plans to produce only 300 units of the XE SV Project 8 – and all of them will be hand-assembled by the Special Vehicles Operations division at its Technical Center located in Coventry, the UK. The vehicle will be offered globally, but we will have to wait until June 30 for its full reveal, when we will have all technical details and, hopefully, a price.

Another possibility for the spied prototypes is that Jaguar is already testing an SVR version that could become a regular member of the XE family. According to preliminary information, if approved for production, the car could be powered by a slightly detuned version of the 5.0 V8 with 500 hp.

Photos: CarPix (gallery below) and Automedia (gallery in text)