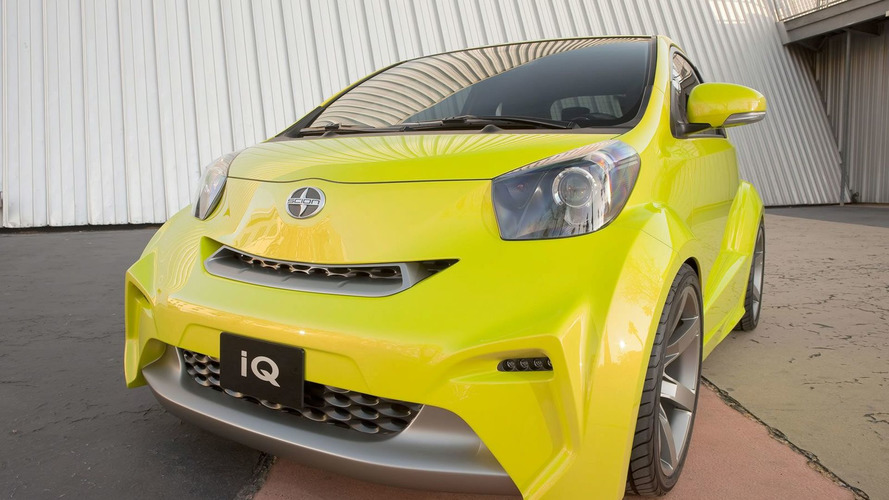 Scion has unveiled a concept version of the Toyota iQ microcompact at the New York Auto Show, with a flashy body kit and high-efficiency performance.

With stylish, youthful vehicles like the Nissan Cube and Kia Soul hitting the U.S. market, is Scion is still on the cutting edge? The xD and tC are getting rather long in the tooth after all, and even the iconic xB's edginess has been blunted.

Scion fired back at the doubters with the unveiling of its iQ concept at the New York Auto Show today. Based on the Toyota iQ microcompact, Scion's version turns a wild tuner's eye to the urban transportation pod with results that make the Brabus smart fortwo look restrained.

Scion turned to well known Toyota tuning and design firm Five Axis to modify the interior and exterior of the iQ, with wild results. Eighteen-inch wheels are pushed out to the corners of the 126.9-inch long vehicle, giving it a roller-skate stance. A widebody kit and front spoiler, HID driving lights and a center-mounted trapezoidal exhaust add uncommon touches to confirm that this is no low-buck penalty box.

The upgraded interior features rich materials and a ten-inch LCD screen that combines entertainment system and navigation controls. It can also play movies when the iQ is parked. It folds flat when not in use. The iQ will hold three adults and a child, or the small rear seats can be folded for additional cargo space.

A 93-horsepower 1.3 liter four-cylinder provides power, and the iQ's suspension has been upgraded by Tein with coil-overs. ABS and Toyota's Vehicle Stability Control (VSC) are also included.

Scion did not confirm whether it plans to sell a version of the iQ in the United States, but such a car would be a reasonable step for the company given the current high-visibility and popularity of the micro-compact smart car. Brought to the States at that level, the iQ would provide a slightly larger and more useful vehicle with similar high-efficiency and inner-city maneuverability, and could be just what Scion needs to recapture the attention of the hipsters again.