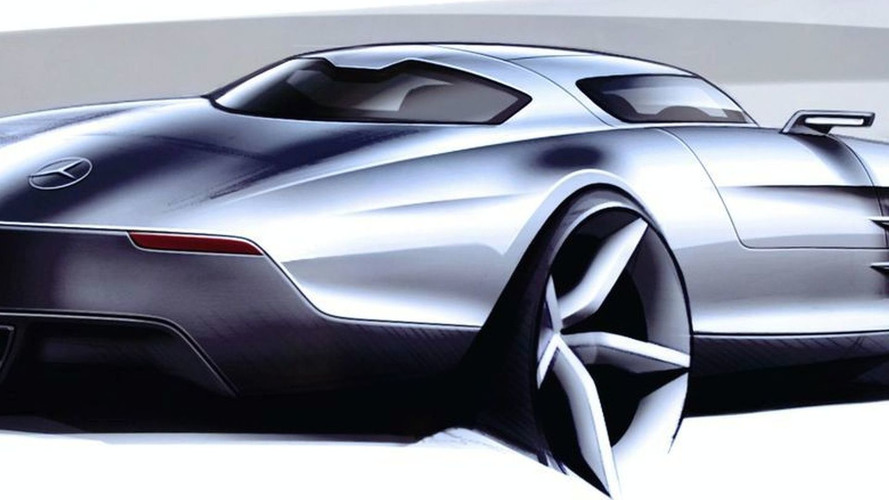 These photos are the first official interior shots of the Mercedes-Benz SLS AMG Gullwing. Also included were a few MB sanctioned sketches of the exterior.

These photos are the first official interior shots and design sketches of the Mercedes-Benz SLS AMG Gullwing. Mercedes has been quite disciplined in slowly releasing little bits of info and photos of the McLaren SLR successor over the past few weeks. Most recently a series of SLS videos preceded by up close photos of the gullwing prototype during testing.

We get a few ideas of the possibilities of this car when taking a look at the interior, a smooth composition mixed with grey leather and carbon fibre paneling. We can see the paddleshifters behind the three-point, flat-bottomed steering wheel, as well as the aluminum gear shifter between the seats. Under the gear shifter, we see the dial that controls the COMAND infotainment system. It may be way too early to hope that this is actually the new internet-enabled MYCOMAND, but it would be nice to be able to pilot this car with the most up-to-minute traffic information while listening to any streaming radio station.

This, of course, makes life easier when you're pushing the 563hp 6.2-liter V8 powerhorse through a congested highway system. When you are given the chance to break loose, the seven shift-indicator lights which accompany the 9000rpm tach will surely help you get the best possible performance from the seven-speed dual-clutch gearbox. With the engine front mid-mounted and the gearbox located towards the rear, the SLS Gullwing has 48:52 front-to-rear weight distribution. 0 to 62mph arrives in 3.8 seconds with a top speed of 196mph.

Same as the recently revealed E63 AMG, the SLS is equipped with the AMG drive unit which allows four gearbox modes to be selected: controlled efficiency, sport, sports-plus and manual mode.  This is done via the biggest rotary dial just left of the gear shifter on the center console. The drive unit also includes the Start button, rear spoiler control, ESP and the infamous AMG button, which allows the driver to preset their favorite settings.