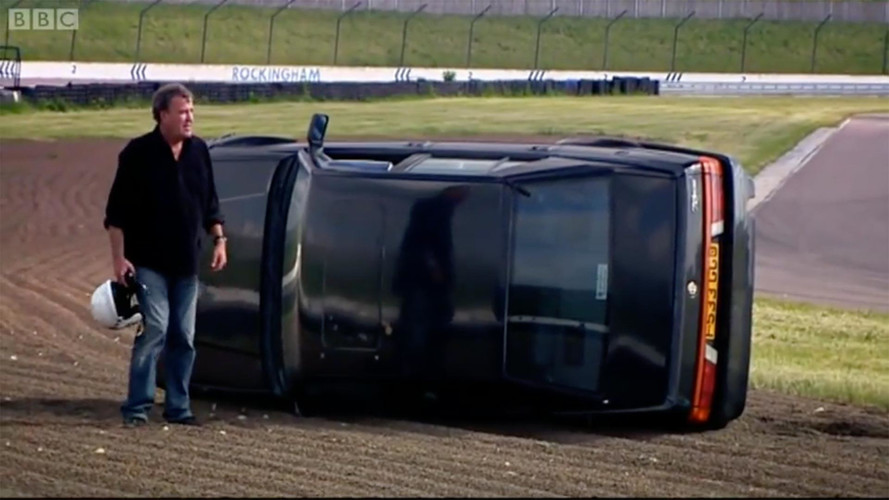 These are the wrecks you can watch without feeling guilty about anyone being seriously injured.

Richard Hammond’s recent crash in a Rimac Concept One while filming a segment for The Grand Tour once again highlights the danger that comes with hijinks that he, James May, and Jeremy Clarkson create. Wrecks are a staple of the trio’s entertainment both on Top Gear and on their new Amazon show, and here are some of the great stunts that show how the guys make automotive destruction look like so much fun.

Jeremy Clarkson bears more responsibility for the Reliant Robin’s woeful reputation than anyone else in the world. He largely cemented the three-wheeler’s infamy for its easy ability to tip over in a single segment where he keeps rolling the little trike. The stunt is worth a chuckle at first, but watching the car topple over gets even funnier each time he sends it skidding.

Despite its avian namesake, the Robin doesn’t perform any better when airborne. May and Hammond attempted to build a space shuttle out of one, and the undertaking ended in a fireball.

While Top Gear didn’t help the Robin’s international reputation, the show only strengthened the notoriety of Toyota pickups for reliability, especially the Hilux. In a series of stunts, the crew tried to destroy the pickup. In this clip, even a drop off a 23-story imploding building wasn’t enough to keep the tough vehicle’s engine from starting up.

After proving its strength, the Hilux appeared in more Top Gear challenges. In the guys’ effort to build an amphibious vehicle, Clarkson used one of the pickups to build the "Toyboata." It was a truck with an outboard motor on the rear and showed mixed results as a watercraft. A later revision successfully crossed the English Channel, though.

While Hammond seems to suffer more serious crashes, Clarkson is well acquainted with things going wrong behind the wheel, too. In the clip above, the Tall One managed to flip an Alfa Romeo 75 (sold as the Milano in the United States) while lapping a track.

In this brief video, Clarkson can apparently  predict the future. As soon as he says the Porsche 911 GT3 doesn’t tolerate fools, the car decides to prove it.

Clarkson takes this BMW on a very long (and unplanned) spin.

Lastly, here’s Clarkson chucking a Ford RS200 off the road.

With a reputation as the Slow One in the trio, James May often isn’t the cause of crashes on the show, but that doesn’t mean he’s not involved in them. A running gag on Top Gear had Clarkson and Hammond crashing into May at every possible opportunity. The video above offers a compilation of May’s many bumps.

Even The Stig crashes sometimes. While doing the Power Lap in Koenigsegg CCX, Top Gear's tamed racing driver lost control and slammed into a pile of tires. Only his pride suffered injuries, though. Later, the hypercar returned with the "Top Gear Wing" and cut its lap time to 1:17.6 from 1:20.4 originally.