You Shall Not Pass! Subaru Rams Jeep To Keep It From Passing 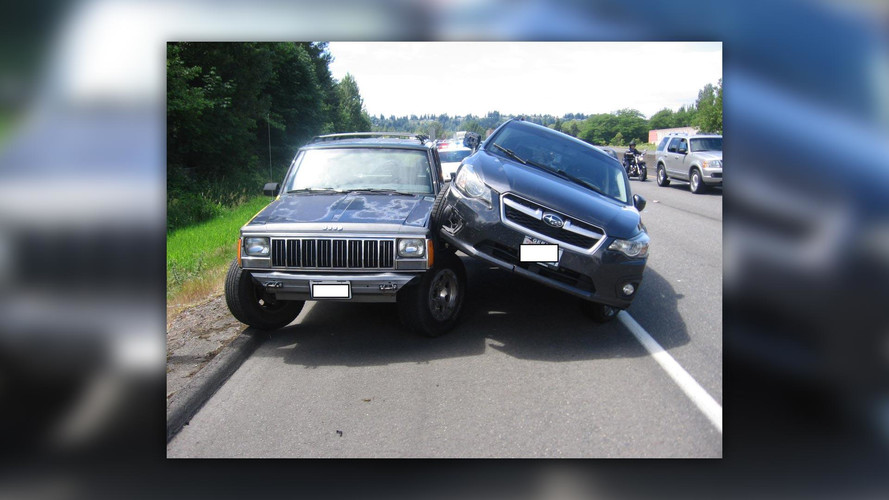 A Subaru Impreza driver in Kent, Washington, got tired of cars passing on the shoulder during gridlock. Tensions became so high that the person crashed into an old Jeep Cherokee that was trying to go around and then hit the SUV two more times. Photos from the scene showed that the Subie ended up balancing partially on top of the Jeep.

According to The News Tribune, traffic was backed up for several miles on Highway 516 in Kent on June 20, and many people started to use the shoulder to make progress. The Impreza driver responded by pulling over to block these vehicles’ path. However, the Cherokee made an effort to drive further off the road to go around, and the Subie driver wasn’t going to let that happen.

According to Trooper Rick Johnson, Washington State Patrol District 2 Public Information Officer, both drivers received tickets for negligent driving. It doesn't appear that there are any injuries from the collision.

Blocking traffic makes a lot of people mad. For example, a viral video from 2015 captured an incredibly burly man lifting a small hatchback out of the way because the little car was in the bicycle lane. People cheered for the impressive stunt.

Unfortunately, the results aren't always so humorous when drivers get angry over blocked traffic. For example, dash cam footage in 2016 captured a Ram pickup pushing a Nissan 300ZX out of the way on the highway after the Japanese sports coupe slowed down in the left lane. The truck launched the Nissan into the guardrail, and the people inside the 300ZX suffered minor injuries.