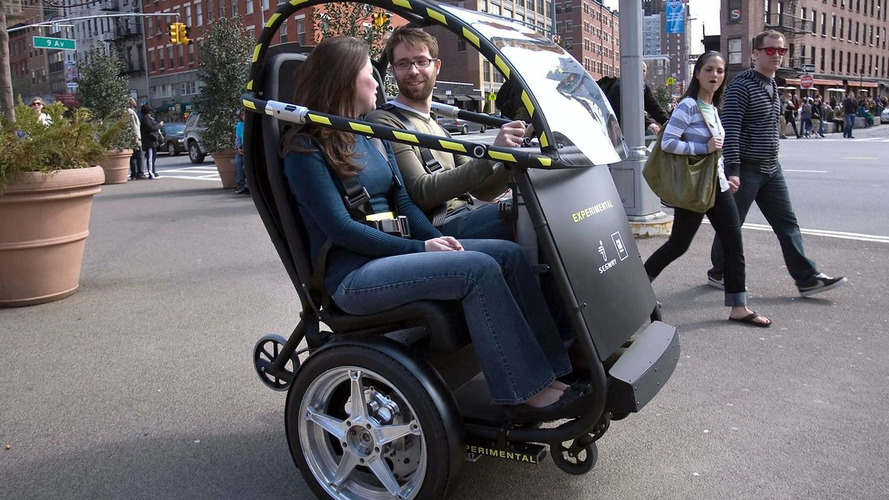 People mover is made for dense urban environments. Dubbed Project P.U.M.A. by GM and Segway, partners in this project, the two-wheel, two-seater electric vehicle is designed to move people around a city "quickly, safely, quietly and cleanly."

Hey, what is that? It looks like something you'd see in a Paul Verhoeven sci-fi flick - very Total Recall-ish.

The way GM and Segway explain it, partners in this project, it's a two-seater, two-wheel electric vehicle that moves people around an urban space "quickly, safely, quietly and cleanly." As if there's something wrong with noisy, polluting over-sized cars.

They call it Project P.U.M.A., which stands for Personal Urban Mobility and Accessibility, and the vehicle has a range of 35 miles (56 km), can carry two or more passengers, depending on future seat configurations, and moves at a top speed of 35 mph (56 km/h). The Project P.U.M.A. will debut at the New York auto show tomorrow; definitely a perfect locale to showcase a vehicle made for dense urban environments.

There's something called Dynamic Stabilization on the PUMA because, you know, the thing has to run on only two wheels, and a Smart Battery management system for the lithium-ion power pack. Yes, the technology is there but what's the horsepower rating on this thing?

Segway? Where have we heard that before? Oh, yes, they make those weird, two-wheel gizmos you have to stand on that you see Kevin James riding around in in his latest movie Paul Bart: Mall Cop - it's a comedy.