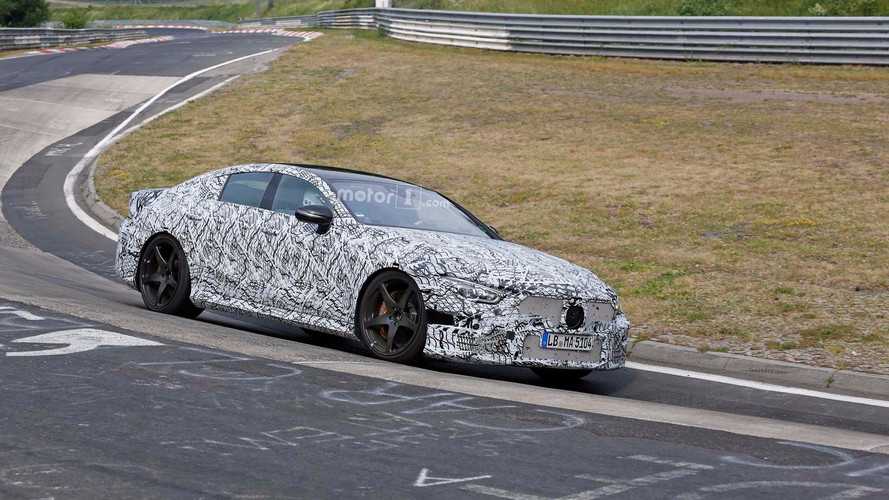 The production version could get an 805-horsepower hybrid system.

The forthcoming four-door version of the awesome Mercedes-AMG GT has made another appearance, this time in its natural habitat – the Nurburgring. Actually, five door might be a better description for this grand touring supercar, as there’s plenty of evidence from this disguised prototype to suggest the family-friendly version of the sizzling GT will in fact have a rear hatch where you’d expect to find a trunk. The steeply raked C-pillar, high-mount third brake light, and body gaps on the rear glass are telltale signs that this Merc is looking to join the ranks of other such machines like the Porsche Panamera, Audi A7, and the new BMW 6 Series Gran Turismo.

There’s something of an elephant in the room on that comparison, however. While power could well come from the 4.0-liter bitubo V8 found in the rest of the GT line, the four-door AMG GT Concept unveiled at the Geneva Motor Show actually paired that engine with an electric motor to create a monstrous 805-horsepower hybrid. The system is said to be inspired by the manufacturer’s Formula One cars, called EQ Power+. Going forward, that is expected to be the branding for all performance hybrids from Mercedes.

Should the hybrid system go into the big GT sportback, it would absolutely destroy the current GT range topper, the 577-horsepower AMG GT R. The car would likely scoot to 60 miles per hour in under three seconds, while having limited all-electric driving capability. Like the Formula One system, the hybrid’s batteries would be charged while the car is in motion, either by the braking system or the engine, so all 805 combined horsepower would be available all the time.

Such a performance sportback would also destroy all other vehicles in the five-door segment, not to mention rivaling all but the most extreme hypercars. Considering such performance would come with comfortable seating for four and a copious amount of cargo space, it could well be a game changer when it goes on sale next year.