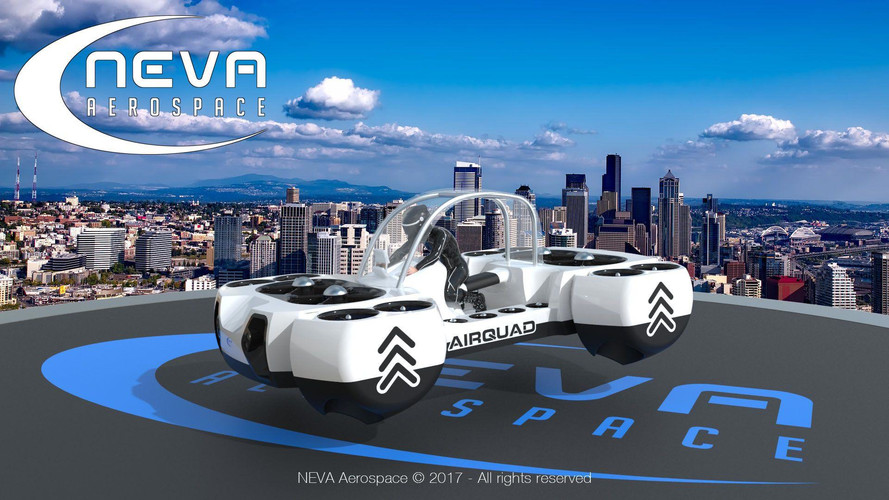 The company also intends to build an unmanned version for hauling cargo.

There’s suddenly a lot of effort going into the creation of personal flying vehicles, including an attempt by a team of Toyota employees. The latest one we are seeing comes from a company called Neva Aerospace that aims to create the AirQuadOne as an aircraft that a pilot rides like an ATV. It’ll debut publicly at the Paris Air Show from June 19 to 25.

The AirQuadOne uses a network of Neva’s proprietary static thrust electric turbofans. With 331 pounds (150 kilograms) of batteries on board, the powertrain can propel the aircraft at up to 50 miles per hour (80 kilometers per hour). There’s also enough juice for vertical takeoff and landing. The batteries only hold enough power to let the vehicle remain airborne for around 30 minutes, though. The firm is considering a hybrid version for longer flights.

Neva imagines people would use the AirQuadOne for a variety of jobs. In addition to being a recreational vehicle, the aircraft could do work in search & rescue, patrols, defense, and as an air taxi. A planned version as a drone could carry up to 221 pounds (100 kg) of cargo.

Neva is now working to get flight certification for the AirQuadOne from the FAA in the United States and EASA in Europe. The craft looks like it would be a lot of fun to fly, but the 30-minute flight time means the pilot needs to start thinking about where to land not very long after getting into the air.

The AirQuadOne’s nearest existing competitor is the Kitty Hawk Flyer that has financing from Google co-founder Larry Page. It features a set of pontoons for use on land or water, and there are two simple controls.

European consortium Neva Aerospace, whose aeronautical engineering and VTOL technology is emerging as the realistic front runner for heavy duty electric and hybrid aviation, is sharing its Neva AirQuadOne commercial concept for personal manned aircraft with visitors to the Paris Air Show (19- 25 June).

AirQuadOne benefits from the power and VTOL capabilities of Neva’s static thrust electric turbofan (ETF)
technologies, developed and now proven by Neva Consortium members in the UK and Germany. This is
the same technology that is also available to OEM developers as stand-alone turbofans (2.5 – 15kgf) and
modular turbo-drones (MTOW up to 50Kg). See more information HERE.

The AirQuadOne is expected to weigh around 530kg, including 150kg of batteries for the full electrical
version and a 100kg for the pilot. Journey times up to 30 minutes, depending on mission and load,
including vertical take-off and landing. Linear flight will be up to 80 Km/h at altitudes of up to 3,000 feet.
Neva is now starting to work with regulators and pilots to seek light aircraft certification within the
USA(FAA) and EU (EASA). Neva AirQuadOne will have 24/7 traffic management support when flying, with
an emergency satcom connection.

Applications for the manned craft are foreseen to include search & rescue, recreational flying, aerobatics,
patrols & defence, transportation, and personal air taxis. Unmanned versions will be able to lift payload
up to 100kg and replace cranes and helicopters for delivery to challenging locations.

Neva expects the battery pack to be similar and/or compatible with those of cars, with recharging at
standard electrical stations via direct wire connection, induction or a battery pack switch. Neva is also
looking at hybridisation solutions for range extension.

The Neva AirQuadOne will have 24/7 flight management support when flying, with an emergency satcom
connection. In line with its commitment to sustainability, Neva plans to use recycled carbon in the manufacturing process as it already does today for most its parts. Neva Aerospace co-founder and chairman said: “We have been working on the AirQuadOne concept since 2013, but waited to share it until our static thrust technology was proven.

“It is another step along our inception roadmap, which is proving to be realistic and achievable. Our longterm
plans are coming to fruition. The Neva technology that is already available now and concepts like
Neva AirQuadOne are only the beginning.

“This technology will also be disrupting the short-termism that has threatened to dominate the investor
market. As the low-tech hobby drone market stagnates for investors, serious electric aviation becomes a
real financial opportunity.”

Neva co-founder and chief science officer Prf. David Brotherton-Ratcliffe: “This is an exciting use of our principles for 3D distributed propulsion with electric turbines. This approach provides safety and control through redundancy. The only limitation we have today is the current limitation of the battery technology available. “The next steps or us will be ensuring redundancy in flight controls and energy sources.”

Editors’ note: The performance Neva AirQuadOne is made possible thanks to Neva’s Static Thrust and
Semi-Dynamic turbines. Electric turbofans (ETFs) designed for static thrust and optimised for Vertical
Take-Off and Landing (VTOL). You may also hear them referred to as electric VTOL turbines (EU/FR) or
electric VTOL turbo-fans (US). Unlike a standard electric ducted fan (EDF), a Neva electric turbofan (ETF)
has a specifically calculated shaped inner shroud.

NEVA AEROSPACE is a European consortium based in the United Kingdom. We partner with key clients,
technology suppliers, and financial institutions to develop technologies for unmanned air vehicles (UAVs),
unmanned air cargo(UAC), aerial robotic platforms (ARP), and electric aviation. Neva has a portfolio of
patents and technologies which are among the most advanced worldwide. As of January 2016, the Neva
Consortium included 5 companies; and more than 100 people are actively working on our projects.
Neva Aerospace offers turnkey solutions based on autonomous, sustainable aerial robots capable of
carrying 2kg to 2 tonne payloads. Under development since 2009, our electrical aviation systems are
designed to perform precise tasks and services. Capable of both vertical take-off and landing (VTOL) as
well as horizontal flight, they have the accuracy needed to operate in congested urban environments.
Their remarkable stability in flight will ensure that they are also reliable over long distances and as
platforms for delicate service and maintenance work.

Neva is developing through partnership with key clients (oil & gas, construction, agribusiness,
transportation, industry automation) and technology suppliers (avionics and air system controls, turbines,
composites, robotics, etc), together with financial investors. This consortium development approach adds
strength and ensures balance in the Neva business model. It provides access to our markets and to the
key technologies needed to introduce heavy drones into civilian regulated airspace and industrial
businesses. It also provides synergies between investors, early adopters in our target markets and
providers of key technologies.