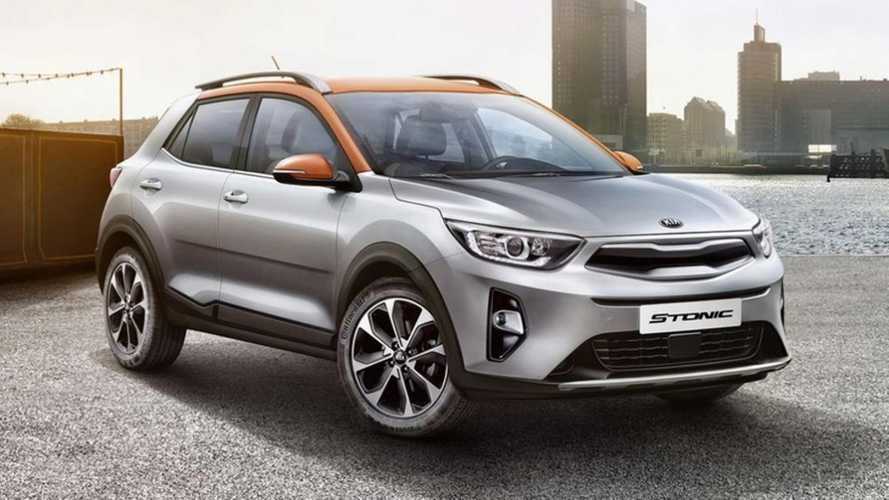 You were not supposed to see it until next month, according to previous reports, but here it is – this is Kia’s all-new Stonic crossover, which is in fact scheduled to make its official online debut later today. We can now take an early look at the car thanks to images leaked on Autodato.com.

Just like every new model on the market, the final production version of the car is not as sexy as the design sketches suggested, but it’s still one good looking and modern vehicle. The sleek headlights and vertical fog lamps create a distinctive fascia, while the two-tone body finish suggests there will be tons of customization options available for the customers.

The two-tone scheme is carried over to the interior, where a central tablet-like display is dominating the dashboard surrounded by the climate system’s air vents. The center console is home to the climate controls and other features, most likely the heated seats buttons, ESP switch, and others. In fact, the dashboard is almost identical to the Rio’s layout, which was confirmed earlier this month by a couple of teaser images.

Just hours before the car’s official debut, we still don’t have trustworthy information about its engine lineup, but we expect it to get the same range like the recently introduced Hyundai Kona. If that’s the case, the American customers will receive a 2.0-liter naturally-aspirated gas engine, while in Europe the Stonic will be offered with a 1.0- and a 1.6-liter turbo units, as well as a 1.6-liter diesel motor in two power stages. Also, we will have to wait until later today to find out whether it will get an AWD system or no.

Look for a public premiere of the Stonic at the Frankfurt Motor Show this fall with sales starting in the weeks after the event. Stay tuned for more and official information later today.