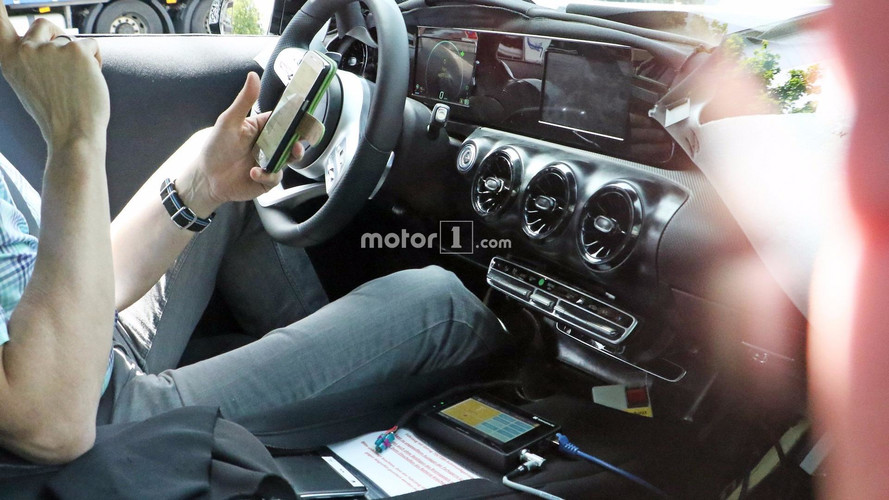 With even mainstream small cars such as the new VW Polo getting an all-digital instrument cluster, it doesn’t come as a surprise the premium Mercedes A-Class will lose the analog dials for its next iteration. It won’t get rid of them entirely as it’s safe to assume the cheaper versions of the range will still boast a conventional setup considering you can still have it on the base E-Class.

While the much more expensive E- and S-Class models have a pair of 12.3-inch screens, the ones installed on this A-Class prototype seem to be of a significantly smaller size. That being said, it might just be a provisional setup and the final car will have bigger screens. On a personal note, that massive glossy black framing around the screens is not my cup of tea. If the production-ready car will come with larger displays, it means there’s going to be less plastic around them, so it will look way better.

The air vent design is similar to what the E-Class Coupe and Cabriolet have, but with only three (instead of four) vents in the middle. Very few physical controls are noticeable on the dashboard, and that’s because most of the functions are going to be incorporated in the swanky new infotainment system. We can also catch a glimpse of the three-spoke steering wheel and the start/stop button installed on the central dash next to the air vent.

Expect to see just about the same layout in all of Mercedes’ MFA2-based cars, such as the CLA and the first-ever A-Class Sedan, just to name a few. The interior cabin is likely to become more spacious as a result of an increased footprint already noticeable on this prototype, which seems to be not only longer, but also wider as well.

The A-Class hatchback will likely be the first to see the light of day at some point in 2018 and will be followed shortly by the sedan already confirmed for United States along with the four-door AMG GT.