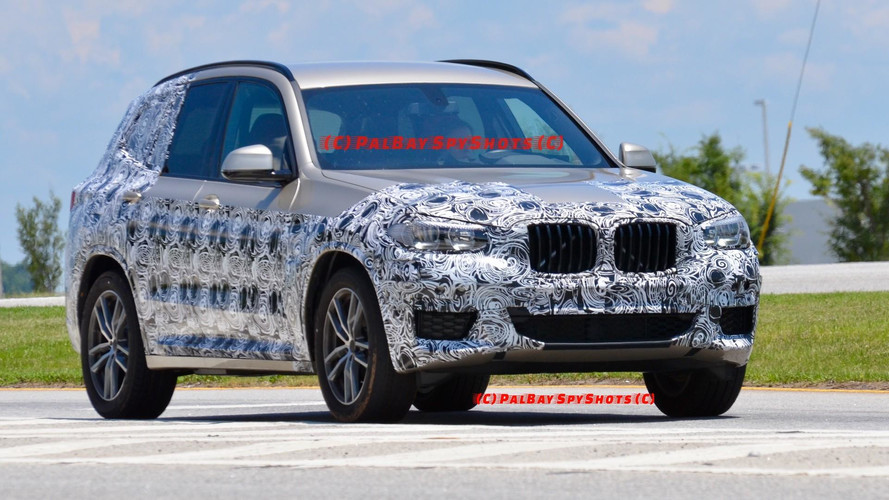 It may not look that different, but this is going to be an all-new model.

We are only a few days away from the official unveiling of the third-generation BMW X3 and now the posh SAV has been spied once again performing a final round of testing in the United States. There are actually two prototypes in the adjacent batch of spy shots, one showing a lesser version clad in swirly disguise and the other is an upper-spec model hiding its design underneath a full body tarp. The latter was probably en route to a private viewing or a photo shoot taking into account it did not have any camo.

BMW’s designers are playing it safe with the new X3’s design as it won’t change that much compared to the outgoing model. “Evolutionary” is probably the right word to describe the appearance of the compact crossover, but underneath the familiar sheet metal it’s going to be a significantly different car. Although a minor bump in size is expected, the new model should go through a healthy diet as a result of switching to the CLAR platform bound to underpin a wide array of models from Bavaria’s portfolio.

The increase in size should pay dividends in terms of the amount of space available in the cabin where the stretched wheelbase will generate additional legroom for passengers sitting in the back. There’s also going to be a slightly bigger trunk along with other improvements brought by the more optimized packaging resulted from the new underpinnings.

Rumor has it BMW has plans to diversify the X3’s lineup by giving the premium CUV a warm M40i version with an alleged 360 horsepower while an M40d is set to offer 320 hp coming from a biturbodiesel engine. Both will share an M Sport Package as standard, an xDrive all-wheel-drive setup, and sportier settings for the steering and chassis.

A couple of plug-in hybrids are also in the works for the new X3, as is a full electric derivative already confirmed for a 2020 launch. To top it all off, BMW will also do an X3 M for the first time in the model’s life.

Meanwhile, the regular X3 will supposedly debut later this week.