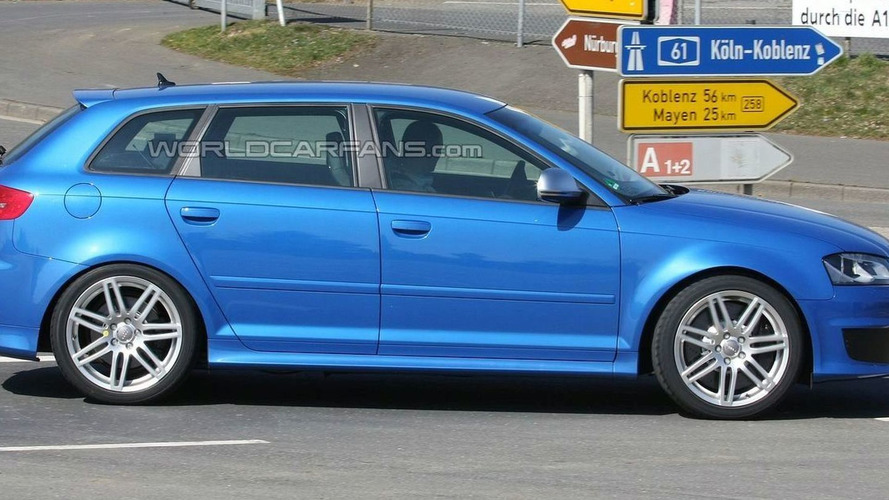 An Audi RS3 test mule is spied burning off hot laps at the Nurburgring for the second time.

Quattro GmbH, Audi's own sport and race department is quite busy these days. Not only is development work underway on the RS5 that we showed you earlier but also the upcoming RS3.

Over the years, Audi officials repeatedly denied any plans to produce the super high-performance RS3 for the simple reason that it was too niche and there was not enough demand. However, it seems chatter of an RS3 began emanating when Ford announced in late 2007 there would be a Focus RS due in 2009.

Apparently, someone at camp Audi took notice and five months later the Audi A3 TDI Clubsport Quattro Concept, which was essentially an RS3 appearance package, was revealed. It's easy to speculate that the A3 concept with its innocuous TDI engine was just a "feeler" to guage public reaction to the hyper hatch.

Fast forward to early March 2009 and Audi board member in charge of technical development, Michael Dick, acknowledges the company is considering building a new RS3. And in just a few weeks later, spies catch the first RS3 powertrain test mule burning off hot laps at the Nurburgring.

Although these photos show the prototype using the current Audi S3 body, the RS3 won't arrive until the next generation A3 is launched, which is in October of 2010, and still another 24 months after that until the RS3 goes public.

Underneath this S3 proto body, the new 2.5 liter five-cylinder turbo engine from the TT-RS delivering 340 horsepower has been transplanted, the Quattro all-wheel drive system fine tuned, the suspension modified and brakes upgraded. Naturally, the RS package will include an aggressive appearance which is defined by an exclusive body kit and wheels.

In these particular photos we can see that the passenger side air intake pocket is completely covered to block air flow while the driver's side has a normal mesh vent. Also, a peek inside the front wheel reveals a significantly larger than normal brake disk which is crossdrilled plus a bigger brake caliper.