Long Distance Lounge Is Audi's Vision Of A Driverless Future 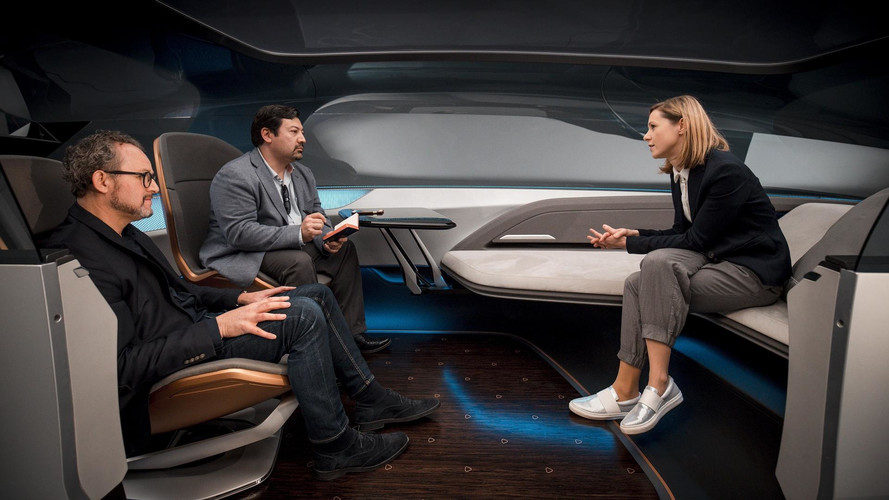 Think of it as the fully autonomous long-wheelbase A8 from 2050.

Audi is on the verge of introducing the all-new A8 flagship with Level 3 autonomous driving capabilities, but the four-ring company is already looking ahead at Level 5 cars. CNET’s Chris Paukert was invited to Audi’s HQ in Ingolstadt, Germany to catch a glimpse of the newly developed Long Distance Lounge, a concept attempting to see into the future of driverless cars. His tour guide was Audi's head of interior design, Enzo Rothfuss.

Roughly the same length as a long-wheelbase A8, the futuristic all-electric LDL feels considerably more spacious inside the cabin lounge than Audi's range topper. It's partially due to the lack of a combustion engine and the rest of the oily bits that take up a lot of space in conventional cars. It has been envisioned right from the start to be a driverless car for extended journeys with all the space inside you’ll ever need. Since it meets Level 5 requirements, it doesn’t come with a steering wheel nor does it have pedals — hence freeing up more room.

Hopping inside the futuristic lounge is done through a huge single door, and once you’re in, the first thing you are probably going to notice will be rather lovely wooden floor. Not only does it look good, but it’s also clever as underneath it there’s a vibration generator that shakes up the dirt by moving it to the side of the interior where the engineers have installed a vacuum cleaner sucking up all the filth.

The interior has been designed in such a way as to provide maximum flexibility, with countless ways to adjust the seats and move them around all over the place. After finding the ideal position, beefy magnets make sure the seat stays tightly into place.

And then there’s the augmented reality technology, coupled with smartphone integration, foldable TFT screens (bound to be replaced by OLEDs), and all the tech wizardry you could ever imagine to see in a car. For example, an array of sensors and cameras can detect the exact position of a passenger and his line of sight. Why? So that the car will know which of the onboard screens should display the requested information.

As Chris points out, it’s not all sunshine and rainbows since ads could easily find their way inside the lounge. Audi’s head of trend communications and cultural affairs, Melanie Goldmann, points out those inside would have control over this by only allowing the desired information to be displayed.

While fully autonomous cars are still a long way off and the Long Distance Lounge is only a futuristic concept, it goes to show Audi is already laying the groundwork for the moment when we’ll all be passengers in our own cars.

For the full story, check out the link below.