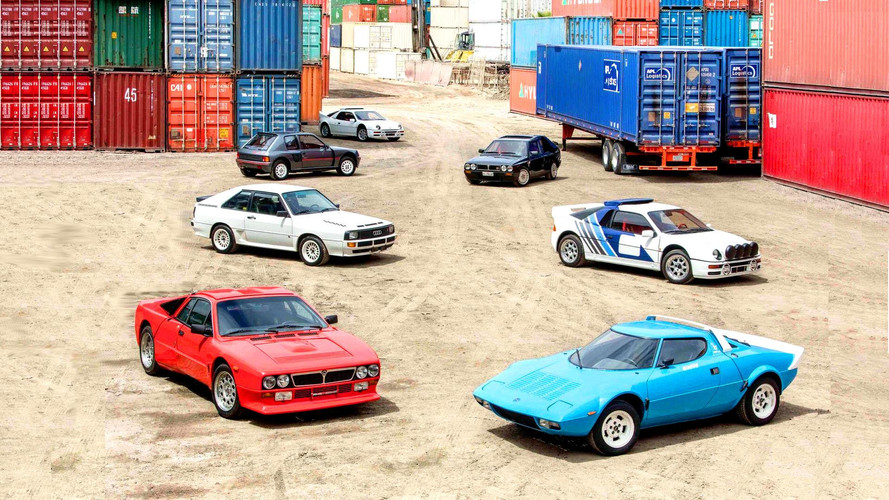 How much does a kidney even go for these days? Probably not enough.

Born on the track and domesticated for the road thanks to homologation rules, these seven race car-derived gems are all heading to the auction block. While Group B was put out to pasture in 1986, the legendary cars born in that era will live on forever and now is your chance to buy one or all of them, should your pockets be deep enough. A trio of Lancias (one of which was born in Group 4), a couple of Ford RS200s, a Peugeot 205 Turbo 16, and an Audi Sport Quattro throw in for good measure — all to be sold without reserve on August 18 by Bonhams at the Quail Lodge Auction.

Supercharged AND turbocharged, the road-going Lancia Delta is the epitome of a hot hatchback and is also one of the company’s most exclusive cars. Only 200 were ever made to meet the aforementioned homologation rules. This 480-horsepower machine has only had one owner and is in pristine condition, as it should be considering the Stradale has covered fewer than 5,530 miles (8,900 kilometers).

Arguably one of the most extreme production cars to carry the Blue Oval, the Ford RS200 was an all-wheel-drive beast with a Cosworth 1.8-liter engine mounted in the middle pushing out about 250 hp. This particular car has had the same owner since 1989 and is original both inside and out. It even comes bundled with the tool box.

It may have been badged as a “205,” but the T16 had virtually nothing in common with the regular model. With a mid-engine AWD layout like its race car counterpart, the 200-hp feisty hatchback was also much wider. All 200 cars were built in a left-hand-drive specification and were painted in dark grey, except for the first one finished in white with body graphics taken from the rally car. As for this one, it’s all-original and the odometer reads just fewer than 745 miles (1,200 km).

Heralding Audi’s now famous AWD system, this one-owner Sport Quattro is like a time capsule and even has Walter Röhrl’s signature above the four-ring logo on the steering wheel. Power comes from the iconic five-cylinder turbocharged mill with around 300 hp delivered to both axles through a five-speed manual. Audi made more than the necessary 200 units, but it is believed only about 164 were ever actually sold. This is one of them.

Because obviously the regular RS200 was not hardcore enough, Ford built an even more intense Evolution version in just 24 units. At full boost, the enlarged 2.1-liter Cosworth engine generated a whopping 600 hp or even more, though it’s unclear whether this particular car was taken to the max. What we do know is that it’s had the same owner since 1989 and appears to be in great shape.

Remember when we said it doesn’t get any better than the Stratos HF Stradale for Lancia fans? Scratch that. The Abarth-tuned 037 Stradale has one of the most alluring shapes to come from Italy and its body was made from Kevlar reinforced with fiberglass. The rear-wheel-drive coupe had a mid-mounted supercharged 2.0-liter engine with 205 hp on tap delivered to the road via a five-speed engine. This one’s too “highly original” and with only 5,840 miles (9,400 km) on the clock.

All things considered, you wouldn’t go wrong with any of these seven cars. Now, head to your local casino and hope for that lucky number 7 (get it?) to arrive at the right time.