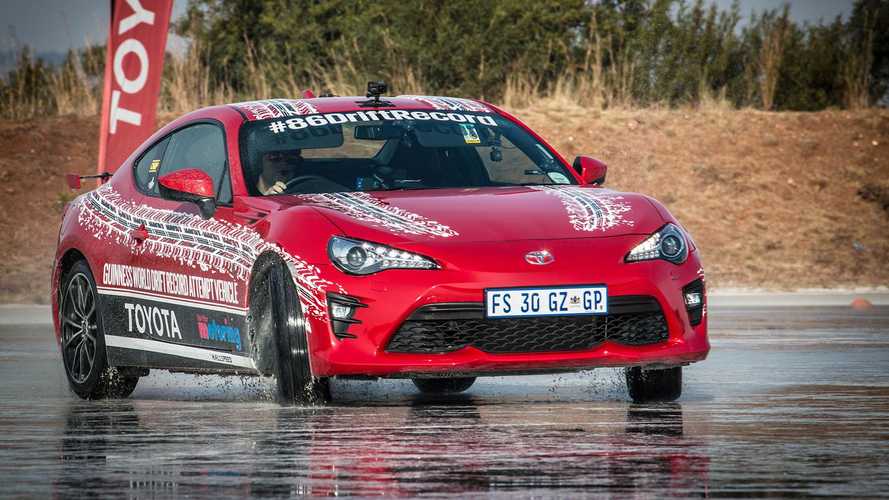 Since it launched, one of the Toyota GT86’s claims to fame – that’s the car also known as the Subaru BRZ  and Toyota 86 – has been its ability to kick its rear out sideways like a dog on hardwood floors. But while it’s one thing to do a quick, naughty drift through a roundabout, South African journalist Jesse Adams decided to one-up things, setting a new Guinness World Record for the world’s longest drift.

Though record certification is still pending, Adams managed to slide the GT86 continuously over a distance of 102.5 miles (165.04 kilometers). That beat the previous record, set by German driver Harald Müller, who managed an 89-mile drift (144 km) in a GT86 back in 2014.

According to Toyota, “The premise of the record is that the driven wheels are not allowed to stop spinning at any time during the run,” but the car can change direction so long as the drive wheels are always in motion.

Toyota used two VBOX GPS data loggers to record information about the record attempt. Each lap averaged just 18 miles per hour (29 kilometers per hour), and 48 laps were disallowed from the record attempt. Still, that put the final tally of officially logged skidpad laps at 952. Adams beat the prior record after 800 laps, but kept pushing to see how much longer he could keep drifting. The data has been sent to Guinness World Records for official certification.

The GT86 used for the record attempt was unchanged from stock aside from the addition of a larger fuel tank installed in the spare-tire well.

The word ambition is quite possibly one of the most powerful words in the Oxford dictionary. Ambition is often quoted as the root of achievement, the foundation of success if you will. Human beings excel when we push ourselves, reaching new heights, distances and levels.

When Jesse Adams - acclaimed motoring scribe from The Star Motoring - pitched the 'ambitious' concept of beating the current longest drift Guinness World Record, Toyota South Africa was naturally intrigued and considered it an excellent opportunity to 'show off' the virtues of the recently refreshed Toyota 86.

The Toyota 86 was designed from onset to be an engaging 'driver's car', offering sublime handling precision and delivering many 'smiles-per-kilometre'. "Possessing a naturally 'tail-happy' character, the 86 is perfectly poised as a drift machine. A low-centre-of-gravity, traditional front-engine, rear-wheel-drive layout and responsive chassis afford the 86 the perfect sports car credentials," says Glenn Crompton, Vice President of Marketing at Toyota South Africa.

The seemingly mammoth task of beating the previously held record of German Harald Muller, set at 144.126 kilometres in 2014 using a Toyota 86 in Turkey, reached its pinnacle on Monday 12 June 2017.

The attempt was conducted on a partially wet skidpan at the Gerotek test facilities, using a demarcated circle with inner and outer borders. The premise of the record is that the driven wheels are not allowed to stop spinning at any time during the run. A change of direction is permitted, as long as the driven wheels stay in motion. If at any point the driven wheels had stopped, the run would be considered null and void and the driver would need to restart their attempt from scratch.

Gathered at the Gerotek Testing Facility, west of Pretoria, South Africa - man and machine were ready to tackle the task at hand. Months of planning, researching and logistical setup would ultimately culminate in an endurance test of both human and automotive partners.

The attempt was officially started at 09:07 CAT, with Adams setting off onto the concrete playground. Lap-by-lap, hour-by-hour, the timekeepers and official witnesses counted off as they kept track of lap times, lap count, spins and change of direction. Noteworthy names such as SupaDrift Director Mike Skelton, SupaDrift judge and motorsport commentator Chad Luckhoff, SupaDrift competitor and promoter Jim McFarlane, SupaDrift National judge and drift content generator Lawrence Minnie and finally MSA-qualified Clerks of Course; Jackie Schreiber and Tony Taylor (who both have extensive time keeping experience) made up the official - and highly experienced -  panel.

The entire team applauded as Jesse Adams gave a signaling 'hoot' on lap 800, signifying that the current record had been matched. From that point onward it would be a push to see by how much the record could be beaten.

In the end after five hours and forty-six minutes, the lap counters ceremoniously rolled over from '999' to '000', indicating a total of 1000 laps had been completed. Triumphant cheers were heard as the team rushed over to a very exhausted Adams to congratulate him on the achievement.

The Toyota 86 completed a total of 168.502 official kilometres, with each lap comprising an average of 177 metres. The average speed of one lap registered at 29 km/h, taking an average of 21.8 seconds to complete. A mere 48 laps were disallowed, bringing the tally of officially completed laps to 952.

The existing record was broken by 24.376 kilometres, a significant number in the greater scheme of things

The above results were obtained and verified through analysis of two independent GPS-based VBOX dataloggers - measuring time, distance, speed, direction of travel and even altitude, with the more sophisticated unit adding synchronised video and audio. The digital data was also supplemented with 'analogue' record of all laps, compiled by the timekeepers and witnesses.

The data has been submitted to Guinness World Records for official verification and far surpasses their minimum requirements.

The Toyota 86 utilised for this record attempt was a standard production unit with no mechanical modifications - bar the fitment of a neatly constructed additional fuel tank which occupied the spare-wheel-well area. This fine example of mechanical art was designed and manufactured by Hallspeed, the HQ of Toyota Motorsport South Africa.

As a testament to the mechanical prowess and integrity of the vehicle, Jesse Adams embarked on one final journey for the day, as he drove home in his record setting steed.