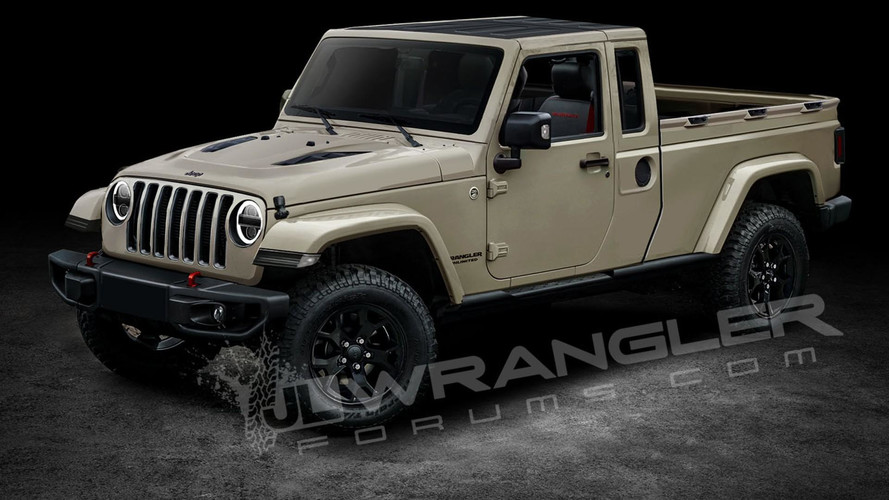 Similar to the fabled mid-engine Corvette and Subaru BRZ STI before it, the Jeep Wrangler pickup has long been the object of desire for off-road enthusiasts. Finally, though, we’ll get to see the pickup truck in the flesh when it makes its debut in just a few years, slated to go on sale for the 2019 model year. But before it does, a new rendering has arrived to help predict its final design.

Pieced together by the folks at JLWranglerForums.com, it’s a pretty straightforward look at the upcoming new Wrangler. Most of the design elements carry over from the previous generation, with some minor updated cues to the grille, headlights, front fascia, and cabin.

The most notable addition (obviously), is the bed. Rendering artists used spy shots to create the final design. Note the body line that runs from the rear of the bed, to the main cabin, and towards the grille. That element may or may not carry over from concept to production, but ties the rendering together nonetheless.

For now most of the final design elements remain a mystery. Already we know that the Wrangler pickup will come with a turbocharged four-cylinder gas engine estimated to pump out 300 horsepower (223 kilowatts). The smaller, four-cylinder option will be joined by the V6 available in the current Wrangler.

A new eight-speed automatic gearbox will replaced the outdated five-speed, while both diesel and hybrid options are rumored to be in the works. The new Wrangler will make its debut a few months before production begins in November at the upgraded Toledo, Ohio plant.