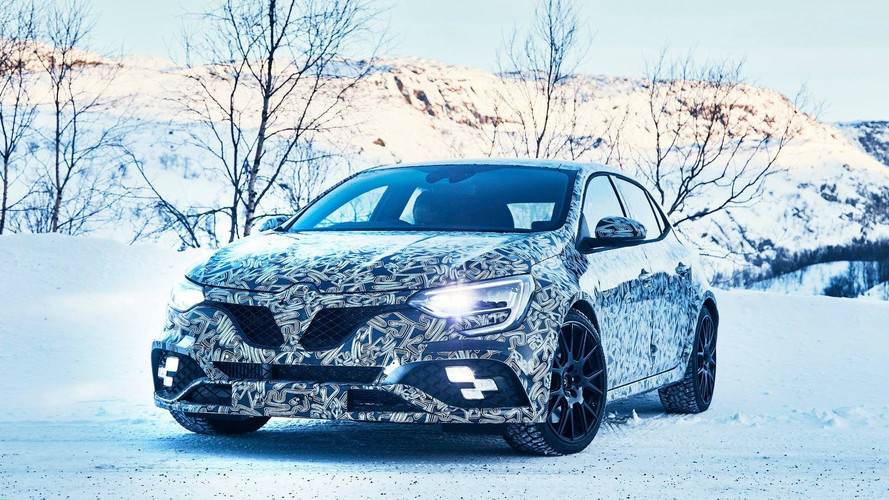 Renault doesn't want to let out too many details about its new hot hatch, but info continues to leak out.

Renault is showing us a few more development shots of the next Megane RS that reveals the camouflaged hot hatch during cold-weather development. The company isn’t dropping any new details about the model, but the photos provide a great new look at it.

Leaked images have already revealed the Megane RS without camo. The new model features a complicated front fascia with LED lights at each corner with a shape reminiscent of a checkered flag. The design also incorporates vents behind the front fenders for drawing cool air through the wheel wells. At the rear, a large diffuser features a trapezoidal exhaust in the center.

There are no shots of the RS’ interior yet, but it’s safe to expect a set of highly bolstered sport seats. Look for Alcantara and carbon fiber touches to lend a sporty aesthetic to the cabin.

Powertrain details also still remain rather scant about the Megane RS. The company admits that customers can choose between a manual or a dual-clutch automatic gearbox. The engine is reportedly a version of the 1.8-liter turbocharged four-cylinder from the Alpine A110 that would make around 300 horsepower in this application. Power still channels exclusively to the front wheels, but an optional four-wheel steering system should improve handling.

The camouflaged Megane RS made its public debut at the Monaco Grand Prix when Nico Hülkenberg took a lap around the famous course in the hot hatch. The company announced that sales begin in the first quarter of 2018.

As a front-wheel drive hot hatch, the new Megane RS’ natural competitor is the Honda Civic Type R that uses a 2.0-liter turbocharged with 306 hp (228 kW) and a meaty 295 pound-feet (400 Newton-meters). It’s currently the fastest front-driver around the Nordschleife with a lap time of 7 minutes and 43.8 seconds.