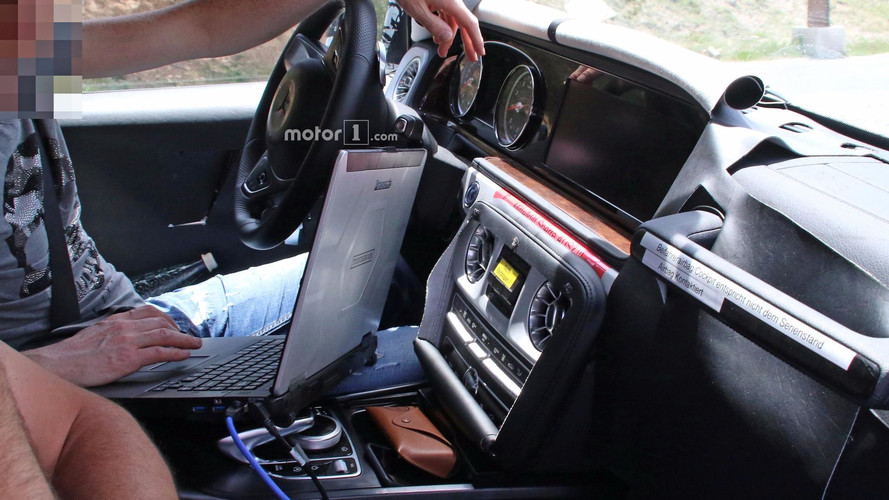 Sadly, the sunglasses and laptop won't come bundled with the car.

The only thing better in this world than a G-Class is another G-Class that has the G63 or G65 badge at the back. Thankfully, Mercedes-AMG has been spied prepping a new version of the former set to employ Affalterbach’s biturbo 4.0-liter V8 engine already powering a wide array of AMGs. While the exterior will stay true to the G-Wagen’s roots, the interior is in for a makeover.

For the first time, we are able to take a good look at the off-roader’s cabin, though it’s still a work in progress at this point. The air vent design appears to be taken from an E-Class Coupe / Cabriolet, but there are only two (instead of four) center vents and these are separated in the middle. The analog dials of the instrument cluster will likely make way on the production G-Class for a digital setup to join the infotainment’s screen.

Bear in mind one can never be too sure with these prototypes caught in the testing phase as the G63’s cabin seen here could simply be a decoy. For our non-German-speaking readers wondering what is written on the grab handle on the passenger’s side, it says the airbag is activated but it does not correspond to the standard.

Stepping out of the vehicle, the new G-Class will remain as boxy as ever and will feature a bigger body to free up space inside the cabin. This particular test vehicle was rocking a pair of halogen headlights like prototypes of the C63 facelift, but expect the production car to come as standard with an all-LED setup. There will be bigger changes than meets the eye as the most important one isn’t actually visible in the adjacent set of spy images. We’re talking about a massive weight loss, with some reports indicating the diet brought by the new underpinnings will shave off hundreds of pounds.

Mercedes will unveil the next-generation G-Class in the months to come and we will likely see it at the Frankfurt Motor Show. The G63 seen here will probably debut in 2018 and will eventually be joined by the top dog G65 with V12 muscle and an exorbitant price tag that will make the G63 seem relatively cheap. Right now, there is a massive $79,000 difference between the two, with the G65 available for an eye-watering $220,400 before you throw any options on it.