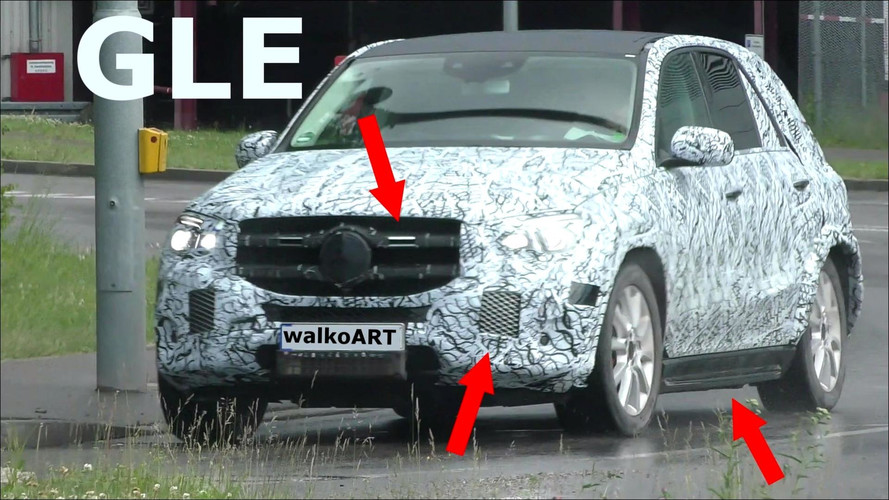 A new spy video provides our best look yet under the camouflage of the next-gen Mercedes-Benz GLE-Class.

Unconcealed sections on the body reveal the double bars that make up the slats on the grille. It’s a similar design as the current model. Further down on the front end, mesh panels suggest prominent intakes in the corners. Again, a version of this design cue also appears on the version of the crossover that’s already on sale. The running boards along the side pick up another stylistic element from the existing GLE-Class.

From these newly revealed touches, it seems likely that Mercedes intends to give the next-gen GLE-Class an evolutionary aesthetic upgrade. The general silhouette looks a lot like the current crossover but is a little rounder. While hard to see in photos, the CUV is somewhat larger, too.

A spy photo of the camouflaged cabin reveals elements in common with the E-Class. High-tech digital display dominate the dashboard, and drivers grip a two-spoke multifunction steering wheel.

The existing GLE-Class stems from an extensive refresh for the M-Class crossover. The new model will likely arrive in 2018 and will ride on a the MRA platform from the latest E-Class, which will cut weight off the CUV.

Power will reportedly come from Mercedes’ new family of inline-six-cylinder engines. Top tunes of the gasoline-fueled version will reportedly produce over 408 horsepower (300 kilowatts) and 369 pound-feet (500 Newton-meters). The highest output diesel variant will produce over 313 hp (230 kW). An integrated starter-alternator can give some of the powerplants mild hybrid capability for improved fuel economy.

Despite its age, the current GLE-Class remains a strong seller for Mercedes in the U.S. The crossover is the brand's second-highest selling model in the country through May 2017. Plus, deliveries have jumped 6.5 percent versus the same period in 2016.