Features chunkier tires and a jacked-up suspension to better tackle the unpaved road.

Engineered to go where no other Frontier has gone before, the Attack concept was born at Nissan’s design center in Rio de Janeiro to explore the idea of a hardcore version tailored to Latin American markets. The pickup truck is currently being exhibited at the Buenos Aires Auto Show and it actually has a chance of hitting the assembly line in the foreseeable future.

The potential production model sits 1.6 inches (40 millimeters) higher than the regular Frontier and has received a set of bigger Yokohama tires to handle even the most difficult terrains out there. Besides the new high-heel shoes, Nissan has stretched the roof and installed bigger seats to make the workhorse more comfortable during longer journeys.

Complementing the bright red and chrome black finish are the tinted headlights, the 1980s-inspired grey “Attack” body decal, and the custom running boards. To spruce things up even further, Nissan has installed a luggage rack to haul more cargo while on the inside there are a bunch of red accents to continue the exterior’s bright livery. 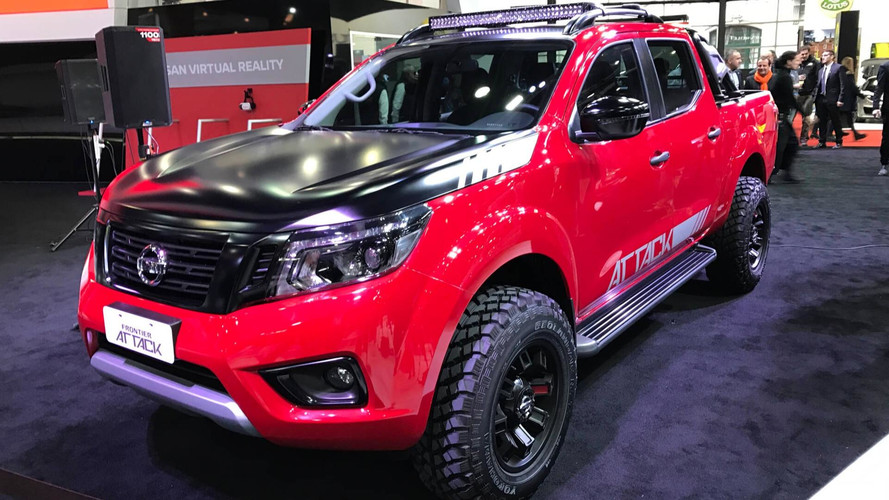 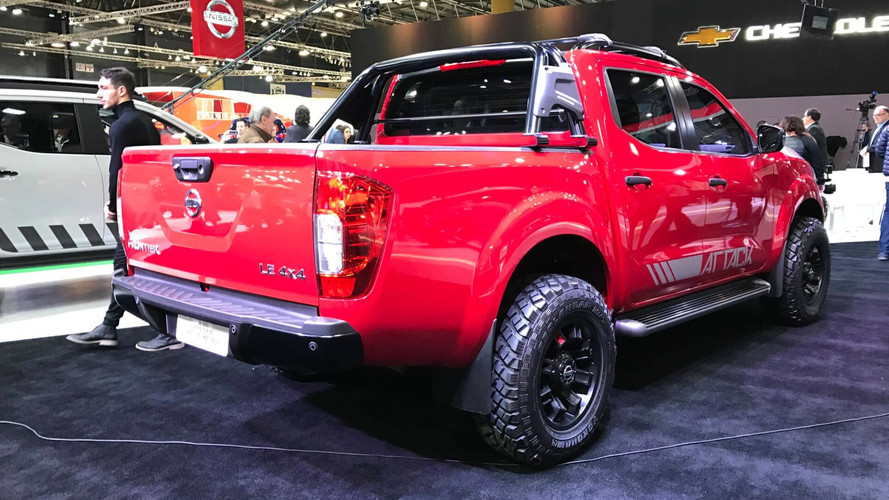 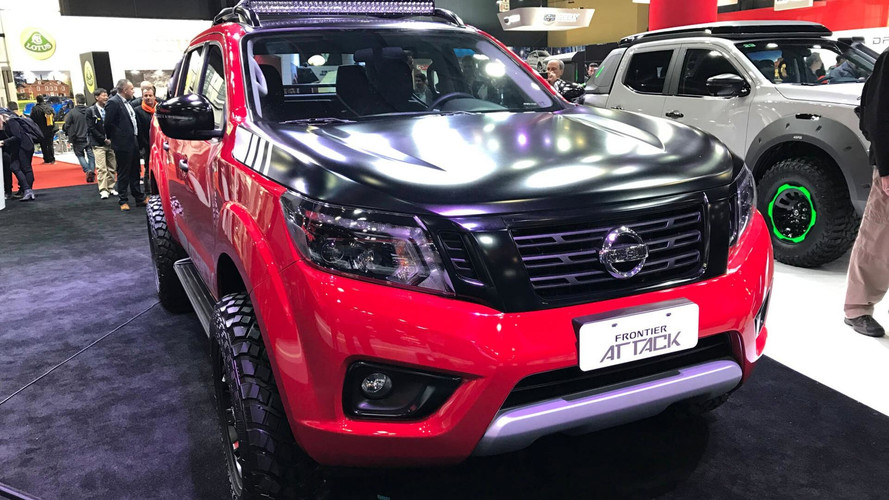 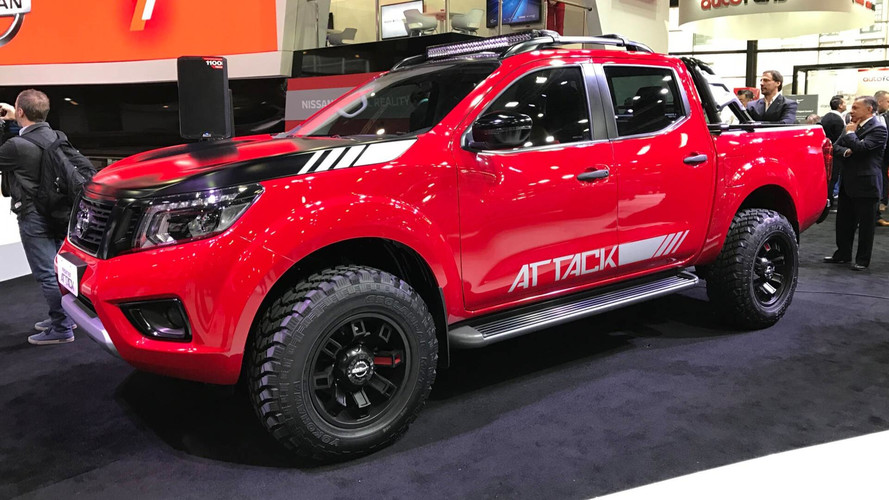 With this being a true off roader, the Frontier Attack Concept bundles Nissan’s best 4x4 hardware, including the vehicle dynamic control system boosting traction on all surfaces. It does that by monitoring steering and brakes to reduce engine speed and even apply the brakes – all while also detecting under or over steering. Goodies like hill start assist and hill descent control come to further enhance the pickup’s ability to tackle bumpy roads.

Power comes from the production model’s turbodiesel 2.3-liter engine with 190 hp and 332 pound-feet (450 Newton-meters) of torque delivered to both axles through a six-speed manual gearbox. Nissan wishes to point out the Frontier is the only model in its class to have a rear multilink suspension with a rigid axle.

Like it did with the Kicks concept back in 2015, Nissan wants to find out how the world is going to react to the Frontier Attack before making up its mind whether it will actually produce the model.

BUENOS AIRES, Argentina – Nissan is set to impress at the 2017 Buenos Aires Auto Show by presenting the new Nissan Frontier Attack, a concept based on the iconic Frontier. It was inspired by extreme and imposing "monster-trucks." As was the case with the Kicks Concept in 2015 in Brazil, Nissan hopes to find out what Argentineans think about the Frontier Attack, setting the basis for a potential production version of the vehicle in the future.

Recently developed and manufactured specially for the 2017 International Auto Show in Buenos Aires, the Frontier Attack concept made its global debut today in Argentina as the third generation of the Attack range that complements the Frontier. Created by the Nissan Design Center in Rio de Janeiro (NDA-Rio) and inspired by the unfriendly terrain in Latin America, the vehicle has a revolutionary design and robust equipment that pickup lovers will not be able to resist.

Nissan decided to completely change the appearance of the NP300 Frontier pickup by introducing a provocative and defiant attitude with the new Frontier Attack. It is radical wherever you look. The new version is 40 mm higher than the current production version, and its roof and tires are considerably larger – leading its designers to name it "the beast."

"Those who knew nothing about the project and had never heard of the Frontier Attack named it 'the beast' when they saw it or the first time, a name that the design team soon adopted," said Robert Bauer, Chief Designer of the Nissan design team in Rio de Janeiro. "With its aggressive design inspired by off-road fans in Latin America and imposing 'monster-trucks,' the Attack is ready to overcome any barrier placed in front of it."

The exterior design of the new Frontier Attack leaves no doubts as to its provocative instinct, and its intense and defying colors – bright red and chrome black – set it apart. The truck is also fitted with black-mask headlights, running boards, collision bars and a luggage rack, which bear the name of the model, and gray mirrors.

The interior has a touch of chrome with gray appliques on the central panel, black leather seats and steering wheel with red flashes, dashboard and gear shift.

The new version of the pickup is 40 mm higher than the NP300 Frontier, as well as larger seats and roof.

The Nissan Frontier Attack provides a powerful response to the challenge of off-road driving, although intelligently. Life on board is now more comfortable thanks to its technology features. Its four-wheel drive mechanism can be activated at the touch of a button, so that the driver can change traction while moving.

The VDC (vehicle dynamic control) system helps to improve traction performance and safety on all four wheels. It continuously monitors steering and brakes, detects over steering or under steering, and reduces engine speed and/or applies the brakes to certain wheels to compensate. It electronically controls the vehicle's traction and prevents it from skidding, overturning or losing control. The VDC system also interacts with other systems such as the anti-lock braking system that improves maneuverability in difficult situations.

Nissan Frontier Attack integrates an Infotainment system called Nissan Multi-App that includes a Navigation System with GPS and a last generation 6.2-inch touch screen, apps such as waze or Spotify, Bluetooth and music streaming system. This is part of Nissan's strategy of Nissan Intelligent Mobility, specifically part of the pillar Nissan Intelligent Driving.

As with the NP300 Frontier pickup, the Attack has a Euro 5, 190 CV, 2.3-liter diesel engine with 450 NM of torque, a manual 6-speed gearbox, and a rear MULTILINK suspension with a rigid axle, the only one of its type in the medium pickup segment. The efficiency and balance of its 2.3-liter engine stands out as far as its engine capacity, power and torque is concerned. It achieves maximum torque at lower RPM. Maximum torque is between 1,500 and 2,500 RPM.

The HSA (Hill Start Assist) system has the facility for drivers to park the vehicle on a slope and put the vehicle into motion without the risk of moving backwards. The system keeps the brakes applied for two seconds after the brake pedal is released.

The HDC (Hill Descent Control) system has the facility to control the vehicle's speed of descent at between 4 km/h (4 x 4 low) and 7 km/h (4 x 4 high) and control the braking system so that the driver can concentrate fully on controlling the vehicle.

Nissan Argentina is getting ready to become an automotive terminal and will commence the production of its NP300 Frontier pickup in 2018 in Santa Isabel in the province of Cordoba. Total investment in the project is US$ 600 million and 1,000 new jobs will be created. Thanks to this project, Argentina will join the global NP300 Frontier manufacturing network that currently includes Thailand, Mexico and Spain.