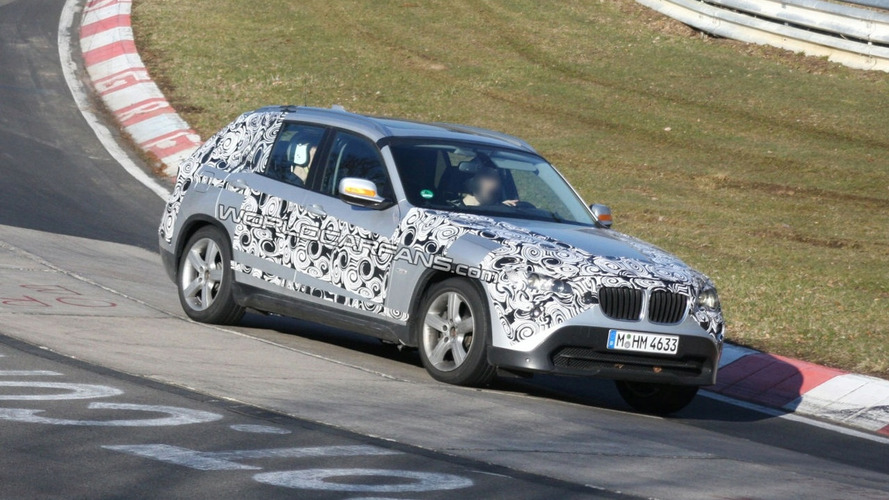 More spy photos of the BMW X1 have appeared. This time the compact SUV is out of snow and on the Nurburgring. The X1 falls below the X3 and is due out in 2010.

It's not often that one sees an SUV "training" on a race track. After all, these vehicles are meant to go off-road more often than not. Unless that vehicle is a BMW X1. The car has been spotted by spies while doing laps at the Nurburgring. The X1 seems out to prove that it really is a Jack-of-all-trades. Not long ago it was spied powering through snow and ice. Later though other spy shots caught the car being pulled out of deep snow by none other than a Volkswagen Tiguan. Now it's chasing lap times on a very long and tricky track.

The BMW X1 is one of the products being used by its parent company to cover as many premium segments as possible. It is a small SUV that falls beneath the X3 but is not going to be the BMW Group's smallest. That privilege will go to the MINI Crossman - unless at some point they decide to resurrect the Isetta and make an SUV of that too!

Engines are likely to be shared with other compact BMWs so expect to see powerplants like the new 180kW (245hp) 3.0-litre turbo diesel as well as the 2.0-litre. BMW is currently developing a small four-cylinder petrol turbo that is larger than the 1.6-litre used by the MINIs. The X1 should benefit from it as well. All four wheels will be driven by the xDrive AWD system and the vehicle will feature technologies like iDrive and Start/ Stop fuel-saving system.

First revealed at the 2008 Paris International Motor Show as a concept car, the X1 goes on sale in 2010.