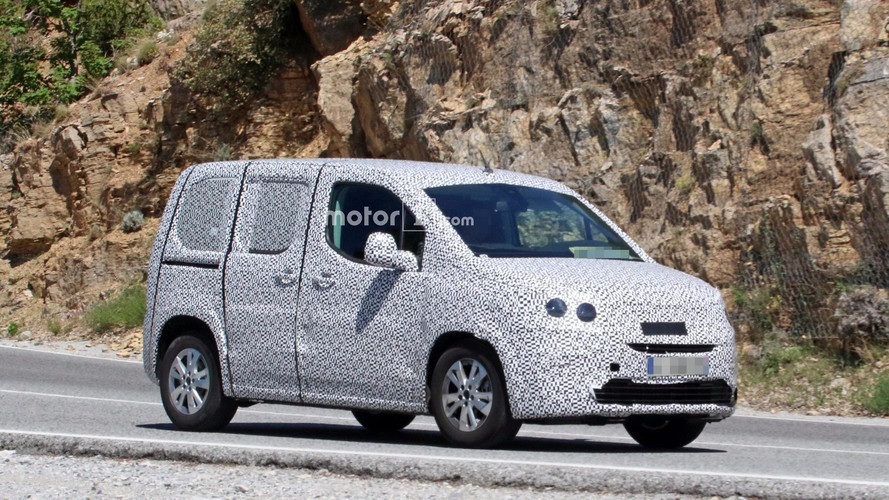 The second-generation Peugeot Partner has been around for close to a decade now, so it goes without saying a successor is in order. Caught just one day after its sister model Berlingo, the new LCV is expected to feature just about the same body panels as the Citroën along with most of the interior to keep development costs as low as possible. As a matter of fact, the only difference noticeable so far is the pattern of the upper front grille.

These new spy shots are showing a prototype with a borderline identical type of camouflage, including those three vertical black stripes — two of which give the illusion of the rear door’s cutout. However, that’s not the case as the sliding rear door is thankfully a tad bit wider and that will make it easier to load items into the Partner’s versatile interior.

Once the hefty amount of camo will come off, it will show Peugeot’s lion badge instead of Citroën’s double chevron logo, slightly different graphics for the headlights and taillights, along with a few discreet variations in terms of the interior cabin trim. While the Partner and Berlingo are primarily being considered as LCVs, let’s not forget these also serve the purpose of a minivan since PSA sells them in Partner Teepee and Berlingo Multispace flavors meant to carry people rather than cargo.

The two practical models are going to be joined by the Opel and Vauxhall Combo and will all be made at PSA’s factory located in Vigo, Spain. The quartet will ride on the same platform developed by PSA and will go on sale in 2018. A little over two years ago, General Motors and PSA made the promise to differentiate the models, but from what we are able to see so far, don’t expect any major variations.

The tie-up between the French and the Germans will follow the launch of the Opel/Vauxhall Crossland X and Grandland X crossovers, which are in fact derived from the Peugeot 2008 and 3008, respectively.