Corvette Crushed By Massive Tree In Storm, Driver Walks Away 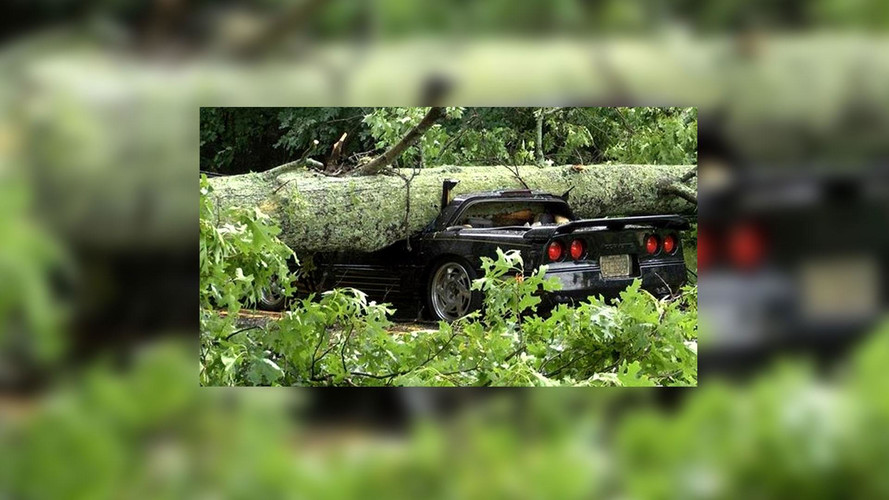 We hope the driver bought a lottery ticket right after this happened.

Here’s a Motor1 top tip: Despite the potential speed and aerodynamic advantages found with a C4 Corvette, they generally aren’t the best cars for storm chasing. Not that the driver of this custom fourth-generation ‘Vette was storm chasing, just the opposite in fact. He was trying to find shelter from a particularly nasty thunderstorm that recently rocked Charlotte, North Carolina when a massive tree came down the Corvette’s roof, flattening it and trapping driver Sonny Dixon inside. Amazingly, he only suffered some cuts and bruises.

“I just didn’t know what was going on with all the glass coming from everywhere,” he told The Charlotte Observer in an interview. “I looked around like this and there was a tree right behind my head.”

Behind his head may be a bit of an understatement. Judging by the photo posted on Twitter by the Charlotte News Channel, the tree looks to be all of two feet in diameter. The report says the bulk of the tree missed him, but he was still struck hard enough to be shoved into the car. Residents and first responders were on the scene almost immediately, and after several terrifying minutes he was freed from the car. 22 stitches later, Dixon seems none the worse for wear.

The same can’t be said for his Corvette, however, which bore several tons of tree square in its midsection. Aside from a flattened windshield and shattered rear glass, the doors and hood are quite mangled. We’d expect some suspension damage as well considering the sheer mass of the tree.

We’d love to say the Corvette saved his life, but the credit this time around goes to luck and a higher power that somehow kept the tree from flattening his skull the way it flattened the roof and A-pillars. Given the size of the tree, we doubt anything short of an armored personnel carrier would’ve fared much better. In any case, Dixon apparently has 15 other cars so while his head will be hurting for a bit, he won’t be hurting for a ride.