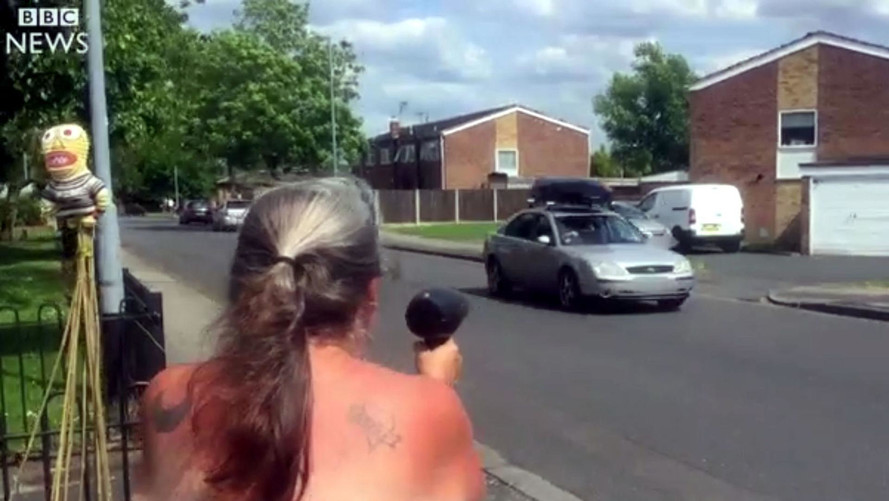 She's not exactly Robocop, but the ruse appears to be working.

Look out speeders of the world, or to be more specific, Nottingham in the United Kingdom. Batman isn’t the only one who’s ready to take on the wretched criminal element who walk – or in this case drive – the streets. Like the Caped Crusader, this vigilante uses unique gadgets to stop criminals in their tracks. Unlike the Dark Knight, our unassuming hero has long silver hair, fights crime in a decidedly unflattering tube top, and apparently gets sunburned rather easily.

Say hello to Jean Brooks. She’s 64 years old, retired, and fed up with all the cars and bikes speeding through her neighborhood. Faced with such an epidemic, she did what any self-respecting grandmother would do – she grabbed her hair dryer, which when viewed from the road at speeds above the posted limit tends to resemble a radar gun.

There’s no grand mystery to Brooks’ technique. She simply stands in her front yard and points her hair dryer at passing traffic. According to her, the bizarro-world speed trap works despite the fact she’s dressed, well, like a retired grandmother.

“I’ve never seen so many people’s brake lights go on, and all it is, is a hair dryer,” Brooks told the BBC. “If we can’t be safe in our own streets, how the hell are we going to be safe in the world?”

Yes, technically she could be guilty of impersonating a police officer, especially now that video of her saying exactly what she’s doing has gone crazy viral. If you want to take it a step further, there could be a liability case for her being an obstruction to traffic, especially if someone were to suddenly brake or swerve and cause an accident. And it’s only a short matter of time before the regular commuters in her neighborhood get wise to the scheme anyway.

But at the end of the day, drivers and motorcyclists have slowed down, and attention has now been focused on the problem. That’s not a bad day’s work for a vigilante grandmother with a hair dryer.