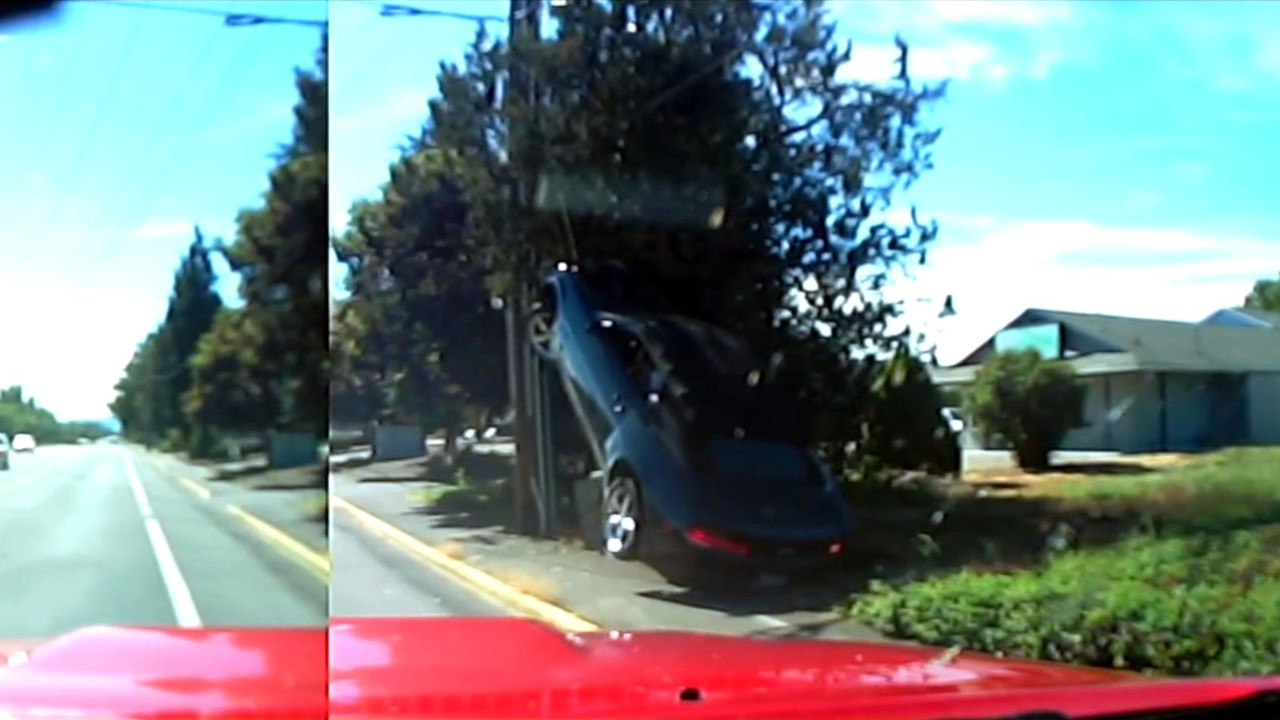 Perhaps the Chevy is just trying to work its way through college?

There are so many pole dancing jokes we could turn to right now, as you can probably imagine. We’ll do our best to keep this PG-13, but when it involves a brake-checking Camaro convertible, a dash cam, and a telephone pole guide wire, we can’t make any promises. And for all the Mustang drivers out there who’ve been itching for a bonehead Camaro video to publicly shame throughout the internet, here’s your chance.

This film comes to us from Facebooker and dash cam owner Mike Mathews, who in the course of his daily commute encountered the aforementioned Chevy after nearly pulling out in front of the driver. We don’t say that in a manner to suggest Mathews was at fault; he stopped short before completing the turn and the Camaro – perhaps running late for an afternoon shift at the local leisure club – was clearly traveling much faster than other traffic on the road. No harm no foul, but then the Camaro driver deliberately slows down and brake checks Mathews three times, presumably in response for the near miss. Not cool.

The adventure doesn’t end there, because our intrepid Camaro pilot punches the gas, nearly hits a truck, gets impatient with another driver, and utilizing driving skills no doubt perfected in Grand Theft Auto, pulls an aggressive lane change before furiously stopping at a red light. Actually, it can’t be Grand Theft Auto since the driver actually stopped, so just choose whichever amateur driving game you like best.

When the left turn arrow goes green we finally get our money shot as the black Camaro predictably nails the throttle, predictably fish tails, then unpredictability finds a guide wire that sends the car up the telephone pole like a feisty Mississippi leg hound. For an encore the driver then pops the car into reverse, apparently oblivious to the severity of the situation. The only thing that could’ve made this ordeal better would be Mathews jumping out to stuff a bunch of dollar bills in the Camaro’s convertible roof.

Remember kids, dash camera are everywhere these days so be on your best behavior when behind the wheel. You never know when you could become the internet's next viral video.