You'll need a lot of green to get this emerald-colored supercar.

The automotive cabin specialists at Vilner aren’t satisfied with the stock cabin in the Lamborghini Huracán. According to the aftermarket firm, “when it comes to the standard interior it seems like the Italians had run out of imagination.” The company has decided to fix this flaw with its new Verde Mantis custom Huracán. 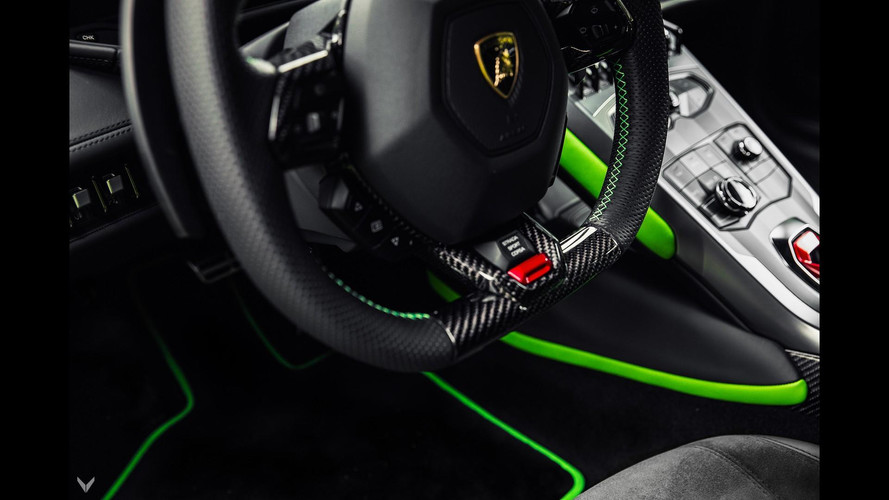 Vilner dubs this the “Lamborghini Huracán ‘Verde Mantis’ like it should be.” The car features Lambo’s bright green color on much of the vehicle’s exterior, and the tuner brings the vibrant shade inside, too.

The company uses special internally seamed padding for creating organic forms inside the cabin, including on the center console. The green shade decorates the center of the seats, door panels, and as an accent for much of the trim. Verde Mantis now appears on the seatbelts and piping of the floor mats, too. Vilner also adds carbon fiber inserts to decorate the interior.

Vilner has plenty of potential clients that might want this type of interior conversion for their Huracán because Lambo now has 8,000 of them and counting on the road. Even more variants could be ready soon, including the Huracán Performante Spyder.

Lambo is currently preparing for a major expansion by adding the Urus performance crossover to its range. The CUV will come with a 650-horsepower (484-kilowatt) biturbo V8 and a plugin hybrid will join the lineup later. In around 2023, the brand will reportedly add a fourth model to the lineup that will take inspiration from classic models, according to recent rumors. Depending on the state of the market at the time, the vehicle will possibly even be a return to offering a 2+2 grand tourer.

Lamborghini Huracán “Verde Mantis” like it should be. But from Vilner

The Italians always give а cool sounding names to everything. For example the factual name of Maserati’s four door saloon is Quattroporte, a name that means… exactly that – four doors. The “Pirelli P Zero” phrase also has the sort of cool charge even for the non car people who doesn’t know anything about tires. Lamborghini is no exception with model names like Diablo in the past and now Aventador and Huracán, which is super successful now with 8000 produced in Sant’Agata for it’s three years of existence. And if you choose to buy a Huracán, this cool name is only the beginning: you can have the fastest version called Performante (how cool is that!) or to have it in a range of colours like Rosso Mars or – like this particular car – Verde Mantis. You can add options from the “Accessori Originali” list or you can go for the “Ad Personam” personalisation program. You see, all is nice to hear.

With Ad Personam you really can transform your Lambo into a form of self expression, but when it comes to the standard interior it seems like the Italians had run out of imagination. If you don’t pay an extra cash over the base for some options or Ad Personam for your new Huracán, you’ll receive a car with oddly dull and colourless cockpit compared to the expressive exterior.

Which was the exact case with this particular  Huracán – striking looking exterior in Verde Mantis with 20-inch Nero Lucido’s and the sort of colour and material combination inside that makes you yawn. Cure? The new “seamless” treatment from Art Studio Vilner. Precisely tailored and done with the same vibe that the car emits with its exterior.

Verde Mantis can now also be found inside in form of internally seamed padding elements. Those elements works as a fresh contrast surfaces, first because of the colour and second – because their organic forms stands out in contrast with rest of the techno-looking and geometric lines of the interior. Vilner also added a carbon fibre inserts, another Precisely executed trim pieces with cold irradiance next to the soft padding in fine leather in Verde Mantis. Those soft pads from Vilner also boosts the ergonomics of the car, especially in the area of the central console where the knees tend to make not so pleasant contact during dynamic driving. The seat belts, as you can see, are also now in that vibrant green colour with a fancy name.

The steering wheel is another example for well balanced execution: carbon fibre inserts with a millimetre precision finish and integration, meticulously seamed together perforated leather by hand with a green string. The custom made floor mats with Verde Mantis piping are the last pieces of Vilner’s “Ad Personam” treatment which transformed the interior in a way that you expect from a car like Lamborghini Huracán.