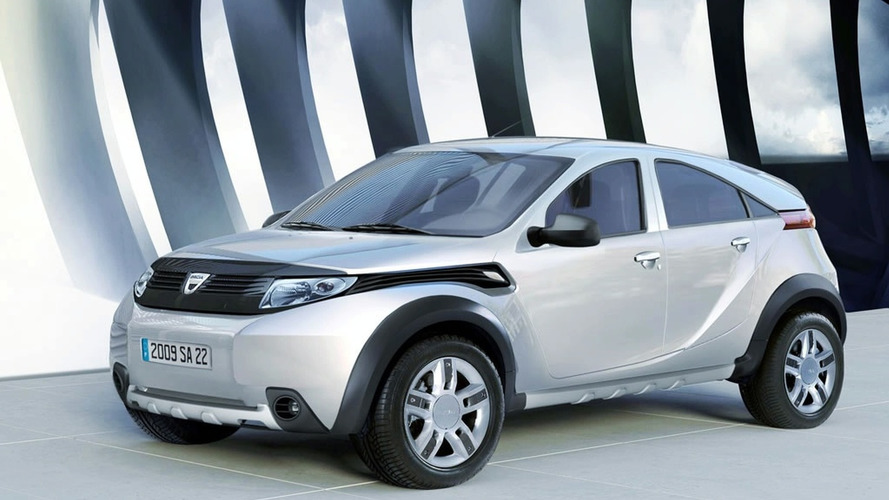 Are these really photos of the production version of the Dacia Duster? We don't think so, but you decide.

A tipster in Romania has pointed us in the direction of these "pics" featuring the production version Dacia's first SUV, the Dacia Duster. Although the concept Duster debuted last month at the Geneva Auto Show, the Romanian auto news outlet Automarket claims the vehicle in these photos will show up at next year's Geneva show.

The concept vehicle came in the picture riding on 21-inch aluminum alloys powered by Renault's 1.5DCi engine. That machine produces 105 hp and 240 Nm of torque, which could get the concept to 100 km/h in about 9.6 seconds when using the six-speed manual. The 4.25 meter long, 1.49 meter high vehicle consumes 5.3 liters of fuel per 100 km, and produces 139 grams of CO2 per kilometer. Adjustability is key to this vehicle, which has a front passenger seat that can hide below the driver's seat to make loading long equipment (bikes, kayaks, etc.) a breeze.

Despite previous reports of the Duster being "genetically" linked to the Qashqai, Automarket claims Dacia, Renault's Romanian budget automaker, will build the Duster on the Nissan X-Trail platform, and will weigh in at 1791 kg. With 16-inch rims as standard, the site claims an actual 100 km/h sprint time of 12.1 seconds, on its way to a top speed of 178 km/h. They say the production model could hold a 60 liter fuel tank, while keeping a spacious 400-liter trunk. They claim confirmation of a €11,500 price from Dacia insiders.

The problem with the Automarket article arises from the supposed leaked images of the vehicle. Clearly this is a bad photoshop job with so many flaws it's hard to begin pointing them out. Instead we will focus on the obvious ones starting with the driver's side rear door. Splice lines at the top of the window can be seen in addition to the door looking completely disproportional. At the bottom of the rear door we can see the lower edge get a little confused as other body lines intersect. Mirrors, headlamps and rear panels also look heavily touched-up, as does the tailgate. The rear windshield looks to have been hit with a blur tool as well.

Most noticeable are the wheels, where "Dacia" is written front to back, but "Michelin" looks to be written in reverse, like a mirror-image. "Michelin" has been airbrushed off the same front tire completely in one of the photos. Meanwhile, the shot of the car's front-end seems to show a front quarter panel that may have been hit one too many times with the clone stamp. And why does the grille seem to get bigger on the passenger side?

No, this looks just a bit too Photoshopy for our tastes, so we will not be so quick to call them official photos. Because of that, take the other information about the vehicle's performance numbers with a grain of salt. The real questions are, "Is this an April Fool's Joke?" and "Who got duped, Automarket, or the other websites that reported on Automarket as fact?"

Certainly, WCF is not imune to this kind of stuff, as we recently got dupped on a MINI facelift story...