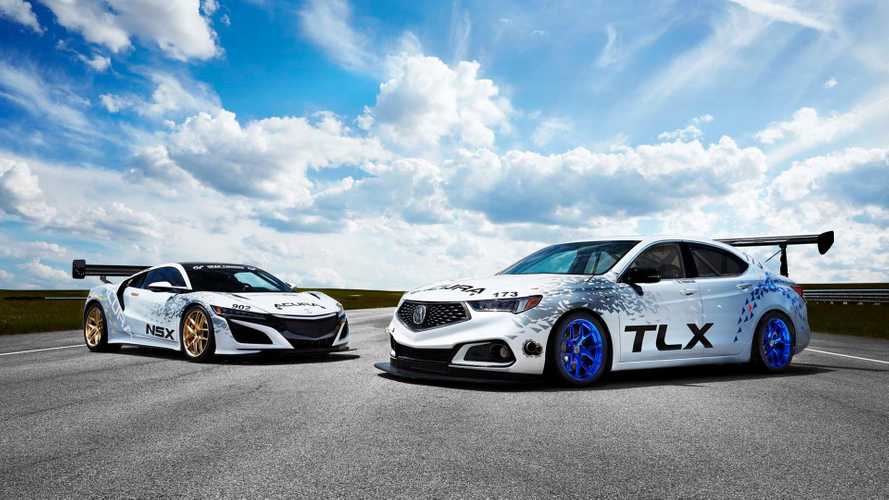 The manufacturer will seek a repeat win with three cars competing at the historic hill climb.

When the flags fly at the 95th running of the Pikes Peak International Hill Climb, Acura plans to be there in force. The manufacturer will field two TLX sport sedans –  including the debut of the 2018 TLX A-Spec – while seeking another win with its NSX supercar, competing this year in the Time Attack 1 category.  In addition, the Acura TLX and MDX will serve as official pace cars and rookie orientation vehicles for the event.

The new TLX A-Spec will compete in the Exhibition class, relying on a heavily massaged 500-horsepower turbocharged 3.5-liter V6 to make short work of the hill. Engineers have also given the A-Spec a limited-slip differential for better grip up front, and aero tweaks in the form of a carbon fiber splitter and rear wing. The suspension has been modified for the trip, and the interior has been gutted to save on weight. Piloting the TLX will be Nick Robinson, who scored the Time Attack 2 victory for Acura last year in the NSX.

The other TLX is an all-wheel drive GT model that returns to competition in the Open class, using a biturbo V6 from the Pirelli World Challenge series that’s been tuned to better handle the extreme elevation changes experienced during the climb. It also features significant suspension tuning, aerodynamic adjustments, and revised gearing to help the TLX accelerate away from the numerous hairpin turns. Veteran Acura driver Peter Cunningham will drive the TLX GT in his debut at Pikes Peak.

Acura says the NSX that will compete in the Time Attack 1 class is a GT3-inspired production model that has been lighted and aerodynamically enhanced for the course. It wears a front splitter and a bigger wing out back, and the car’s software was given a special tune for better performance from the hybrid system. Pikes Peak veteran James Robinson will attempt the back-to-back win for the NSX at the hill.

2017 marks the sixth year Acura has officially raced at the famous hill climb. Last year the manufacturer sent three NSX models to Pikes Peak and scored the Time Attack 2 win with a time of 10 minutes 28 seconds.

Acura will field a pair of Acura TLX sport sedans in the 95th running of The Broadmoor Pikes Peak International Hill Climb on June 25, joining the NSX supercar that will return following last year's victory.

The TLX GT, driven by long-time Acura race car driver Peter Cunningham in his Pikes Peak debut, will compete in the Pikes Peak Open class, while Honda R&D engineer Nick Robinson, coming off victory in an NSX in last year's Pikes Peak Time Attack 2 Production class, will drive a 2018 Acura TLX A-Spec that will make its racing debut in the Exhibition class.  Honda R&D engineer and Nick's brother, James Robinson, will drive a production-based NSX with GT3-inspired modifications in the Time Attack 1 class.

This is the sixth consecutive year that Acura will race vehicles in the Pikes Peak event.

The Pikes Peak Acura TLX A-Spec features a modified suspension, a 500-horsepower 3.5-liter V6 turbo engine and a limited-slip differential for more effective transfer of power to the front wheels. Optimized specifically for this hill climb course, custom engine software and tuning was done in-house by a team of North American Honda R&D engineers. Much of the major engine hardware was pulled from the TLX GT program, including rods, pistons, camshafts and valvetrain. On the exterior, the TLX A-Spec features a hand-crafted carbon-fiber splitter and standoff rear wing while the interior has been entirely stripped of its luxury appointments to reduce weight. A veteran of Pikes Peak, Nick Robinson has run the course for several years, winning the motorcycle Pikes Peak 250 class in 2014. Last year, Robinson piloted the 2017 NSX to victory in the Time Attack 2 Production class.

The all-wheel drive TLX GT race car features the same twin-turbo V6 motor setup used in the Pirelli World Challenge series from 2014 to 2016, but has been tuned on multiple levels to accommodate the elevation changes of Pikes Peak. The new software mapping developed by Honda Performance Development (HPD) optimizes turbo operation and boost pressures for the decreased levels of oxygen on the way to the 14,115-foot summit. HPD also tuned the TLX GT's suspension specifically for this hill climb environment, and the transmission's gearing has been revised for faster acceleration coming out of the course's many hairpin turns.

Other modifications to the Acura TLX GT include aerodynamic components such as the addition of front fender louvres and revised dive planes. Also, the rear wing was moved up and back to increase downforce. The TLX GT will be piloted by Peter Cunningham of RealTime Racing who has been racing Acuras since 1992. The Pikes Peak "rookie" has claimed 14 professional drivers' championships, in a variety of disciplines including road racing, ice racing and performance rallying.

"I've always wanted to race with Acura at Pikes Peak. It's a challenge I've never done," said Cunningham.  "I think we have a great opportunity with the Acura TLX GT and look forward to seeing how it competes on the hill."

The 2017 Acura NSX competing in the Time Attack 1 class will be driven by James Robinson of Honda R&D's North American powertrain development group. A veteran of Pikes Peak, James has competed since 2011, driving a first-generation NSX in the Pikes Peak Hill Climb from 2012 to 2015 and winning the Exhibition class in 2011. Taking learnings from last year's run, as well as adopting ideas from the NSX GT3 race car, the NSX has been lightened and aerodynamic elements have been added, including a bigger wing and front splitter. The NSX's software has been tuned to optimize engine and the Sport Hybrid system performance for the hill climb. Also, R-compound tires will complement the production vehicle's Super Handling All-Wheel Drive™ (SH-AWD™).

As the Official Pace Car sponsor, Acura will feature the recently launched 2018 TLX A-Spec, sporting the new Acura design direction. In addition, Acura will provide MDX Rookie Orientation vehicles for coaches' use leading up to the race. Jack Glavan, manager of the Pikes Peak Highway and an incredible supporter of Pikes Peak for many years, will lead the field of 100 entrants to the top of the 14,115-foot Colorado peak.

For Pikes Peak race attendees, the TLX GT, TLX A-Spec, NSX and pace cars will appear at a number of pre-race activities, including the popular Fan Fest on June 23 in downtown Colorado Springs from 5 p.m. to 10 p.m. MDT.