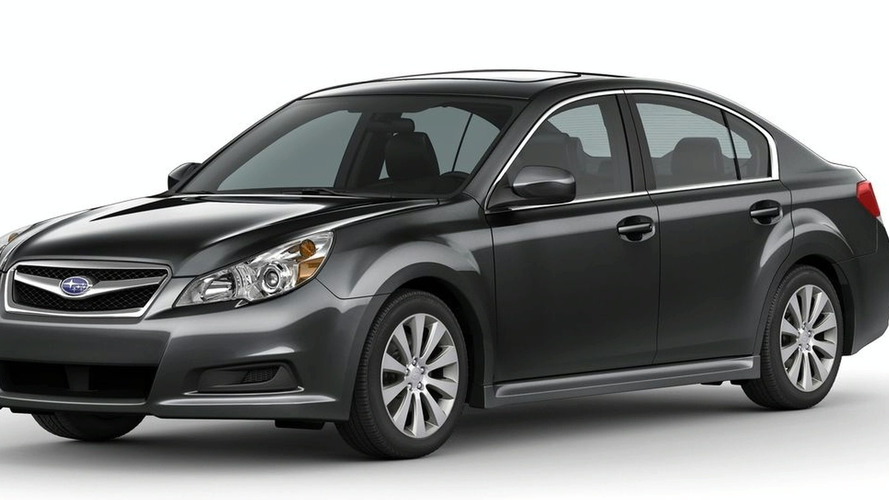 Details of the all-new Subaru Legacy sedan are now available for perusal just over a week before it's unveiled at the 2009 New York Auto Show. The US is to get three engines, including a 2.5-litre turbo.

But some of the familiar stuff includes boxer engines and Subaru's symmetrical AWD. For the US market, which introduces the Legacy at dealer level soon after the show, three engines will be available. The first is a naturally-aspirated 2.5i. It produces 170hp (125kW) and 170 lb-ft (230Nm) of torque. Transmission options are a 6-speed manual and the new Subaru Lineartronic CVT. Up ahead is a 2.5GT turbo with 265hp (195kW) and 258 lb-ft (350Nm) of torque. Only the 6-speed manual is available on the GT. Subaru says this transmission is 25kg lighter than the previous one. Lastly the 3.6R with a 5-speed automatic replaces the old 3.0-litre. It makes 256hp (188kW) and 247 lb-ft (335Nm) maximum torque.

The new Legacy is 35 mm longer, 90 mm wider and 80 mm higher than the outgoing car. A MacPherson-type strut suspension is used at the front and a new double-wishbone suspension is mounted to the rear. The 2.5i receives 16-inch wheels and 205/60R16 while the 2.5GT makes due with 18-inch alloy wheels and 225/45R18 tyres.

Some of the interior features available are an electronic parking brake, a 10-way driver's seat and a new three-spoke steering wheel. Safety features installed include ABS with EBD, an electronic hill holder system and Vehicle Dynamics Control (VDC).