The world really doesn’t need another reason to love the Porsche 911, but Stuttgart is giving us one anyway. Say hello to the 911 Turbo S Exclusive Series, and as the name suggests, it is exclusive. Only 500 will be built for worldwide distribution, and lest you think it’s just a yellow appearance package, think again. Its 3.8-liter biturbo six receives a power kit to make 607 horsepower – 27 more than you’ll get in a standard Turbo S – that can blitz the 911 to 60 miles per hour in under three seconds.

The obvious calling card of the latest 911 is its Golden Yellow Metallic finish, which will only be found on the Exclusive Series. The attention-getting finish is complimented by carbon-weave stripes with additional carbon fiber on the ram-air scoop in back. The roof, side skirts and hood are carbon fiber, and the limited-production Porsche wears a new rear apron. If the yellow metallic is a bit too much for you, Porsche says a range of other carefully selected colors are available.

Inside, the 18-way sport seats get two layers of perforated leather with golden stripes on the innermost layer to contrast the exterior look. Seams receive yellow stitching, and the Alcantara headliner also sports a pair of yellow stripes. Carbon sill plates with Executive Series branding are found on both sides of the car, with yellow embroidered Turbo S lettering on the headrests completing the interior look. Unlike the exterior options, yellow is the only color choice for the interior trim. 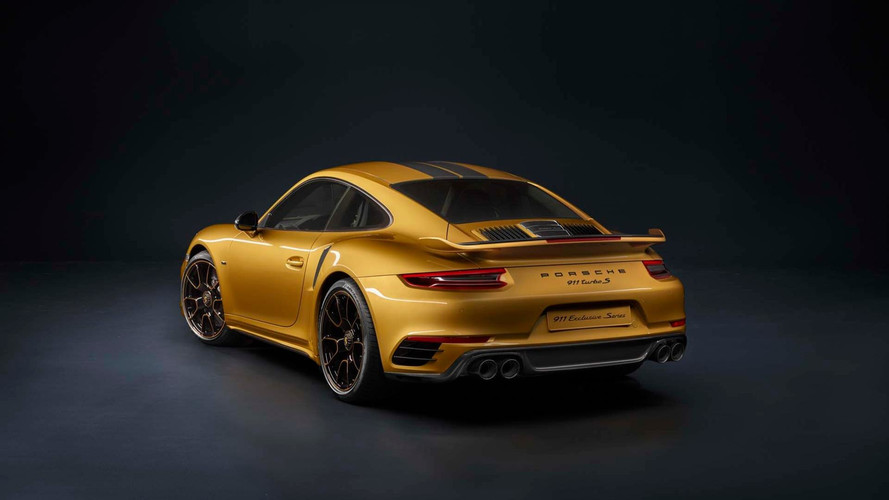 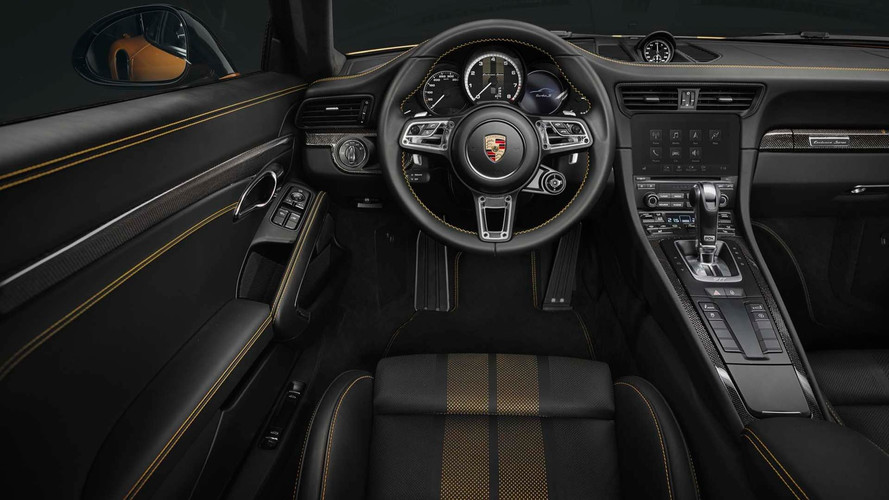 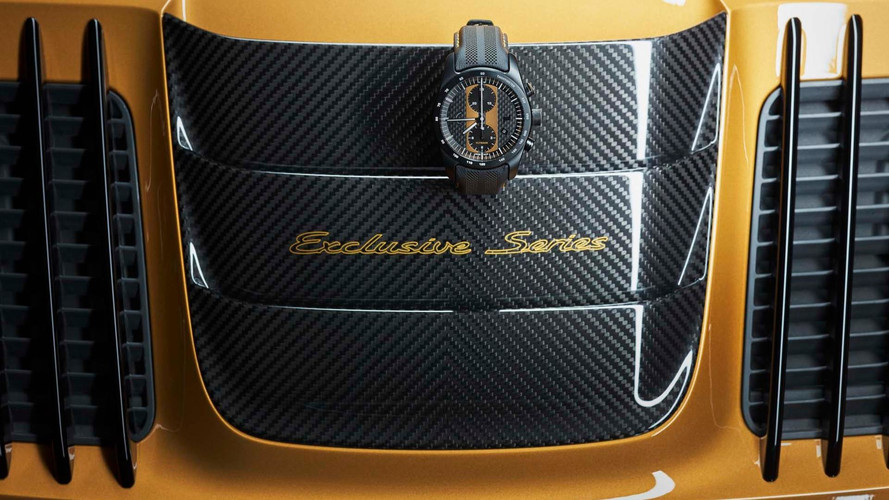 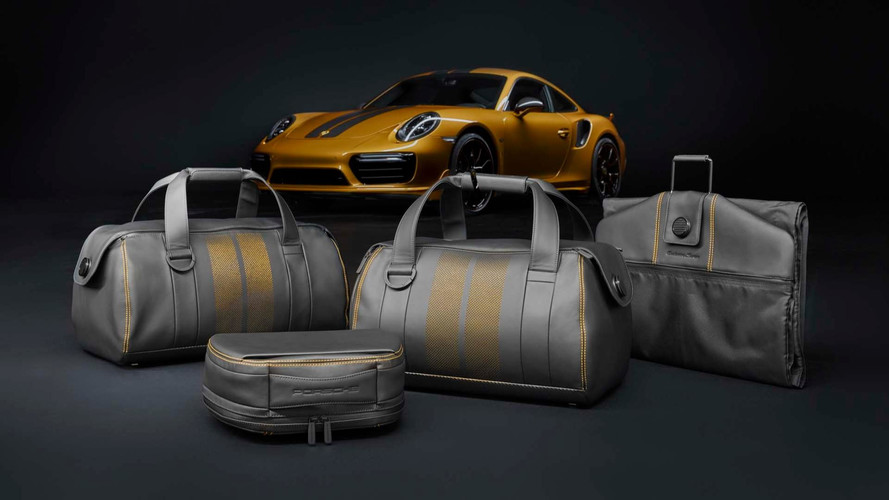 And because the Exclusive Series is, well, exclusive, there are special accessories available. Porsche will offer a limited-production run of 500 chronographs with designs that match the car. A matching set of leather luggage specifically fitted to the 911 will also be available.

Porsche's official launch date for the 911 Turbo S Exclusive Series is June 8th. With only 500 being made, those readers with a spare $300,000 better place orders soon.

42 Photos
By: Christopher Smith
++
Got a tip for us? Email: tips@motor1.com
Hide press releaseShow press release

A rarity with increased power and luxury: the new 911 Turbo S Exclusive Series

The new 911 Turbo S Exclusive Series from Porsche is the most powerful and unique 911 Turbo S ever. The Coupé provides 446 kW (607 hp) and is limited to 500 units worldwide. In addition to a power increase of 27 hp, the 911 Turbo S Exclusive Series is distinct from the standard 911 Turbo S due to its unique design, higher-quality materials and luxurious details. The sports car is being intricately finished by hand in the new Porsche Exclusive Manufaktur at the headquarters in Zuffenhausen. Previously known as “Porsche Exclusive”, the in-house workshop specialises in tailoring to customer wishes, as well as being responsible for limited-edition series. And for the first time ever, Porsche customers can have the matching chronograph from Porsche Design configured in the same design as their sports car.

Increased power and Performance
The 3.8-litre, six-cylinder biturbo flat engine with an exclusive power kit has a maximum torque of 750 Nm, delivering between 2,250 and 4,000 rpm. This means that the 911 Turbo S Exclusive Series accelerates from 0 to 100 km/h in 2.9 seconds, and takes 9.6 seconds to cross the 200 km/h threshold. The sports car can reach a top speed of 330 km/h. Fuel consumption is the same as the standard model at 9.1 l/100 km combined. This corresponds to CO2 emissions of 212 g/km. The 911 Turbo S Exclusive Series comes with black-painted 20-inch wheels with central locking as standard, and their design lines are carefully finished in Golden Yellow Metallic using a new laser technology. For the first time, the brake callipers for the PCCB ceramic brake system are available ex works in a black-painted version with the Porsche logo in Golden Yellow Metallic. The active sports chassis with Porsche Active Suspension Management (PASM) and the Sport Chrono package are included in the standard equipment. The rear-axle steering and Porsche Dynamic Chassis Control (PDCC) rolling-motion compensation improve handling and provide stability.

Exceptional design
What makes the 911 Turbo S Exclusive Series so distinctive is its exclusive Golden Yellow Metallic paint finish and the various components in carbon, like the bonnet, roof and side skirts. The two carbon-weave strips that contour the roof and bonnet accentuate the sporty look of the car. The rear view is characterised by the rear wing of the Turbo Aerokit, the new rear apron, the ram-air scoop in carbon and the exhaust system with two twin tailpipes made from stainless steel in black. The wings are decorated with Porsche Exclusive Manufaktur plates. In addition to Golden Yellow Metallic, the vehicle is offered in a range of other carefully selected exterior colours.

Master craftsmanship in the interior
The passenger compartment is both elegant and unique. The 18-way adjustable sports seats are covered in two layers of perforated leather. The inside layer has two stripes in Golden Yellow, guaranteeing a unique effect. The seams and the Turbo S lettering stitched on the headrests are also in contrasting Golden Yellow, and the roof lining is made of Alcantara with a Golden Yellow double-stripe look. Fine copper thread is integrated into the trim strips of the carbon interior package. The plate featuring the limited-edition number on the passenger's side underlines the car’s exclusivity. The door entry guards, also finished in carbon, come with illuminated Exclusive Series lettering.

Truly hand-crafted
For more than 30 years, Porsche customers have been able to enjoy extensively customised individual pieces. With the introduction of this new limited production run, the sports car manufacturer is beginning a new chapter: Porsche Exclusive will now be presented across the globe with the new “Porsche Exclusive Manufaktur” brand. This inhouse workshop specialises in bespoke Porsche modifications. The range of services available also includes advising customers, developing special equipment options for each model range and producing limited production runs.

High-quality accessories
Customers can also enjoy the unique Exclusive Series design outside of their vehicle with the leather Exclusive Series luggage set that has been developed especially for customers who buy a vehicle from the limited production run. The visual details on the luggage set as well as the dimensions of the two hold-alls, the day bag and the suit bag are the perfectly fit for the luggage space available in the 911 Turbo S Exclusive Series.

Prices and sales launch
Prices for the 911 Turbo S Exclusive Series including VAT and country-specific equipment will start from EUR 259,992 in Germany. It will be launched on June 8, 2017. The Porsche Design Chronograph 911 Turbo S Exclusive Series will be available in Germany, starting at EUR 9,950. The watch can be configured to the customer’s requirements when they buy the vehicle and is available at Porsche Centres. The luggage set costs EUR 5,474 in Germany and is available in conjunction with factory collection or from Porsche Tequipment at any Porsche Centre.