Mercedes 190E And C63 DTM Racers Duel It Out

The boxy lines and big wing still make the 190E DTM car great. The modern model is a lot quicker, though.

Race cars have become much more sophisticated over the last 27 years, particularly in Germany’s DTM series. Where the machines of the 1990s still used production vehicles at their base, today the cars have shed practically everything that a person would find on the street. To demonstrate how much things have changed, Mercedes-Benz has staged a stunt challenging a 1990 190E 2.5-16 Evo II against a 2017 Mercedes-AMG C63 DTM at Italy’s Vallelunga circuit. 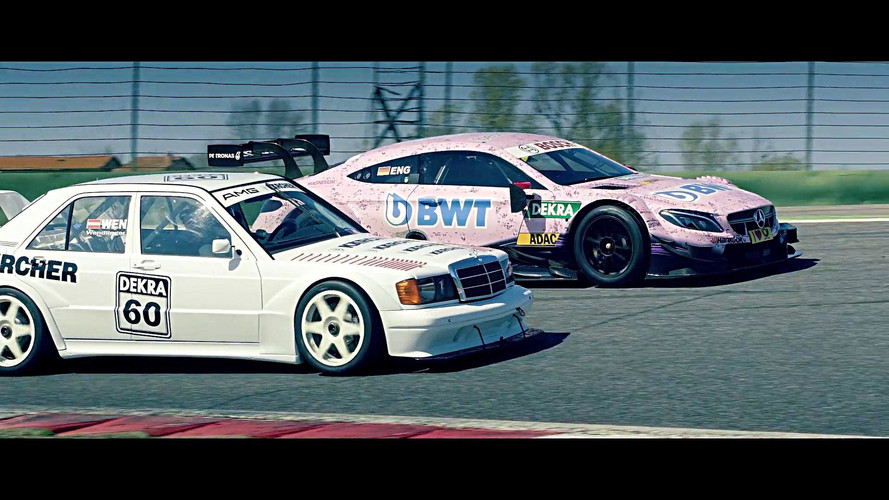 It’s hardly fair even to compare this pair of Mercedes acceleration. The 190E has a 2.5-liter highly strung four-cylinder and uses the road car’s stripped shell. In comparison, the C63 packs a 4.0-liter V8 with around 500 horsepower (373 kilowatts). The modern racer leaves the vintage model like it’s standing still.

The results of the braking evaluation aren’t so obvious from the start, though. In fact, the cold ceramic brakes on the C63 really even the competition between them.

Driving the pair on the track are completely different experiences, though. The C63’s impressive performance commands constant vigilance from the driver. However, piloting the slower 190E is also very engaging experience because the racer has to manage the H-pattern gearshift and double clutching on downshifts.

The road-going 190E Evo is now more than 25 years old, so buyers can import them into the United States without fear of running afoul of the Feds. They are becoming quite collectible. In January, the first 190E Evo II auctioned in the U.S. sold for an impressive $220,000 at RM Sotheby's sale in Arizona. Less pristine examples of the rare model have gone for $145,000 in the country, and they have often sold for six-figure prices in Europe recently, too.