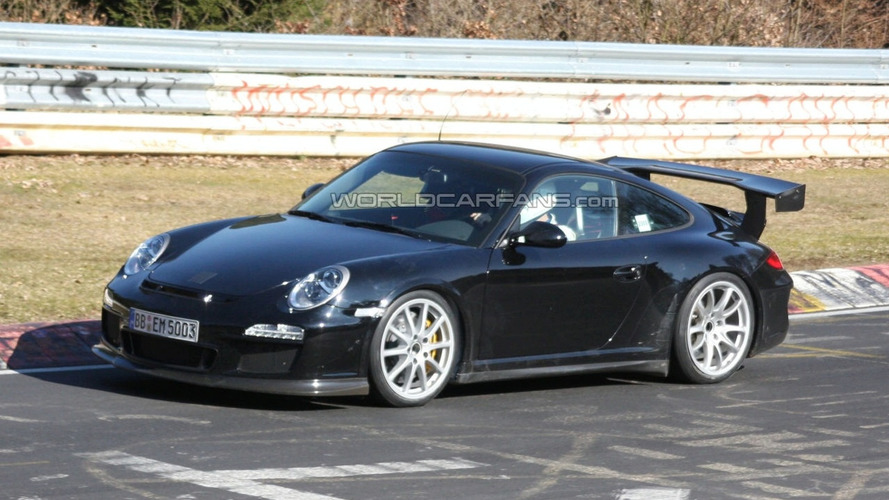 The Porsche 911 GT2 has commenced its testing course at the Nürburgring. Our spy pictures show a car that's more purposeful both in looks and performance. Expect to see it at the 2009 Frankfurt Motor Show.

The new Porsche 911 GT3 RS has been caught doing some serious laps at the Nürburgring. Making its recent debut in Geneva, the 911 GT3 facelift received new rear lights, LED daytime running lights, and a new bigger engine providing 20hp more for a total of 435hp. However, these spy shots reveal the GT3 facelift in RS trim showing widened front fenders and a more purposeful rear wing. Looks like the rear LED high-mount brake light strip that is mounted just below the bottom of the rear glass inside a crevice has been repositioned to sit at the base of the spoiler on the ouside of the bonnet. Surely, this wing is one of several different designs that will be tested during the GT3 RS's development.

Power is expected to remain at 435hp from the direct injection 3.8-liter flat six. However, the RS package is known to liberate a couple dozen kilos as a result of carbon fiber and plastic use throughout the interior and body. The 6-speed manual transmission will be standard but Porsches PDK 7-speed dual-clutch should be available as an option, although it is speculated that PDK will be left out for the sake of weight savings. The GT3 RS should be able to better the standard GT3's sprint to 100km/h of 4.0 sec by shaving 0.1 to 0.2 tenths of a second off.

The first public reveal is expected to take place at the Frankfurt International Motor Show in September. Meanwhile, stay tuned as more spy pictures of this and other facelifted Porsches keep cropping up.