This angle makes the crossover look a lot more like the concept.

New spy photos of a camouflaged BMW X2 on a car transporter are providing the best look yet at the trendy crossover’s front end. 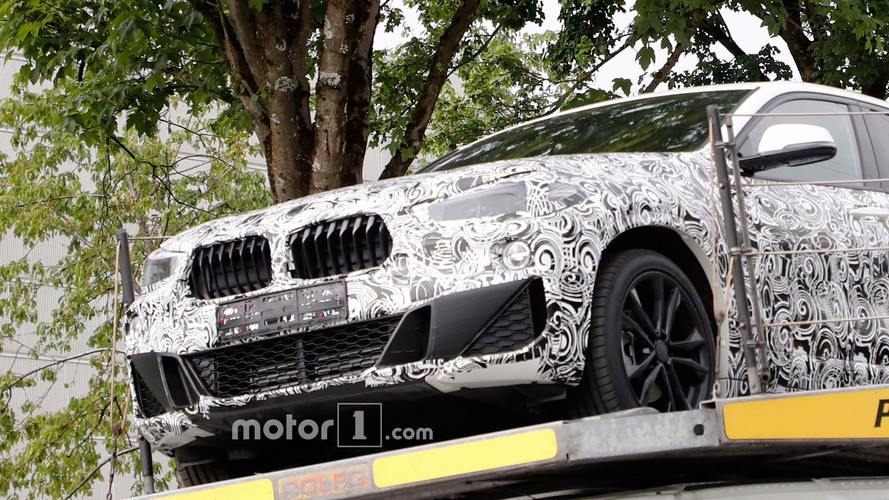 This X2 features a complicated lower fascia with triangular sections at each corner, a complex shape for the air ducts, and a large center section with a mesh grille. The company keeps the headlights camouflaged, but these photos make it easy to see where the concealment ends. The oval-shaped units provide an angular element to the vehicle’s face that fits the styling well. The slight downward slope at the tip of the nose gives the vehicle a sharper silhouette, too.

Looking at the X2 from underneath accentuates the crossovers curves. The raked windshield leads to a sloping roof and arched rear hatch. Compared to earlier spy photos, this angle makes the upcoming CUV look a lot more like its concept predecessor.

An earlier spy video from the Nürburgring suggests that the X2 might have a comfort-oriented suspension, rather than a track-ready tune. The engineers’ decision to choose a softer setup would make sense because owners don’t use compact crossovers on circuits.

The X2 will be a stylish crossover akin to the larger X4 and X6. The X1 compact crossover will serve at the model’s basis, including the powertrain range. Base versions will come with front-wheel drive, but more expensive trims will send power to both axles. An M variant will potentially join the lineup later.

The X2 will likely debut at an auto show in the second half of 2017, possibly even as soon as the Frankfurt Motor Show in September. Sales of the vehicle will probably start in 2018.