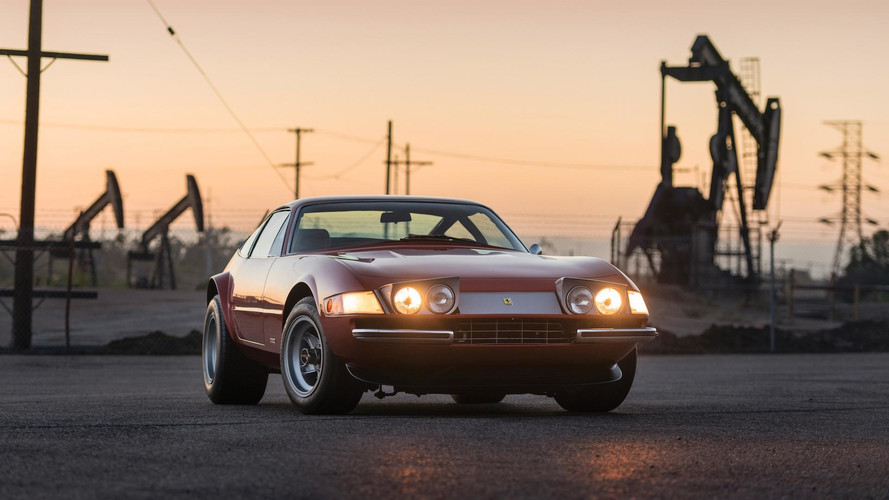 The 1971 Daytona will headline the RM Sotheby’s Monterey sale in August.

Update: When the gavel dropped at the RM Sotheby's Monterey auction, the unique Harrah Hot Rod Ferrari went home for an impressive $687,500.

In 1968, Ferrari introduced the 365 GTB/4. It was a dramatic departure from the 275 GTB before it, and a first, second, and third place finish at the 1967 24 Hours of Daytona gave it the nickname "Daytona," which is still used today. But the car you see here is no factory Daytona – it’s a "Harrah Hot Rod" special commissioned by famed collector William Harrah, naturally.

Casino magnate and enthusiast collector, William Harrah picked up the car new from his West Coast distributor, Modern Classic Motors of Reno, and almost immediately decided that it was in need of an upgrade. The Ferrari was handed over to Francisco Mir’s Service Center in Santa Monica, California where it was given nine-inch alloy racing wheels, thicker tires, and wider fender flares to accommodate the new setup, not to mention a more powerful engine – the specifics of which were unknown.

Now the car is headed to auction as part of the RM Sotheby’s Monterey sale taking place in August. The car was handed over in 1975 to A&P heir John Robertson, who damaged it in an accident, necessitating the replacement of new front and rear clips. The car was sold again in 2002 to collector Peter Markowski, and then again in 2012 to its current consigner.

The car has been fully restored since. A rebuilt suspension and front end was completed courtesy of Ferrari of Scottsdale. New paint and bodywork were done by Glenn Roberts, and a complete rebuild of the numbers-matching engine was carried out by Patrick Ottis, which saw new pistons, rods, valves, and timing chain. All said and done, the car now produces 386 horsepower (287 kilowatts).

The Ferrari is being offered with complete concours-quality sets of books and tools at no reserve. Pricing estimates haven't been given, but previous examples have gone for well over $700,000 in this condition. Given its uniqueness, it's safe to say that a $1 million price tag isn’t out of the realm of possibility for this particular example.

Since his death in 1978, Bill Harrah has become as renowned for his immense automobile collection as for his casinos. He was a reserved gentleman but inside beat major passions, few more quickly than that for fast cars, in particular Ferraris. Mr. Harrah bought his first in 1959, and by the time of his passing was the West Coast distributor, via his Modern Classic Motors of Reno. Virtually every great model built in the last 20 years had passed through his hands, with many of his personal cars receiving special touches to suit his no-holds-barred driving style.

The 365 GTB/4 Daytona Berlinetta offered here was built by the factory in Rame Metallizzato, with a Beige leather interior with Nero seat inserts, and with the U.S.-specification features of pop-up headlights, Borrani wire wheels, and Borletti air conditioning. Upon receiving it as his personal car, Harrah promptly had Francisco Mir’s Service Center in Santa Monica mount competition-style nine-inch rear wheels and fender flares, as well as, purportedly, upgrade the engine.

In a legendary story that well may be apocryphal but is too delightful not to repeat here, Mr. Harrah was reportedly once approached by a Sikorsky salesman, offering him a faster way to commute between Reno and Lake Tahoe. Typically nonplussed, Mr. Harrah commented that he would happily buy a helicopter if it could, indeed, beat him driving the Ferrari between the two Harrah’s Clubs. The race for the ages went down, whirlybird vs. Ferrari, and the Daytona, of course, won – averaging 146 mph along the way.

Harrah passed the Daytona in 1975 to A&P heir John Robertson, who damaged it in an accident, necessitating the replacement of new front and rear clips. The refinished Daytona was eventually sold by Robertson’s estate in 2002 to Peter Markowski, passing in 2006 through a dealer to John Price of Salt Lake City, Utah, the renowned collector of performance automobiles. The current owner acquired the car in 2012, and recently oversaw beautiful paint and bodywork by Glenn Roberts; a suspension and front end rebuild by Ferrari of Scottsdale; and a fresh rebuild of the matching-numbers engine, including new pistons, rods, valves, and timing chain, by Patrick Ottis, who achieved 386 horsepower.

Offered with complete concours-quality sets of books and tools, the “Harrah Hot Rod” is well known and much loved among Ferrari cognoscenti. It has the rip-roaring spirit of its original owner in every nut and bolt.