Does This Look Like A Subaru Crosstrek To You?

It is, and this buggy is racing off-road.

Subaru earned its legacy of motorsport success in rallying, but it recently competed in a completely different type of off-road racing with a wildly overhauled Crosstrek in the SCORE Baja 500. The Grabowski Brothers Racing team of siblings Dusty and Parker piloted this hardcore machine but weren’t able to finish the grueling race. The crew won its class in the earlier event in Lucerne, California, though. 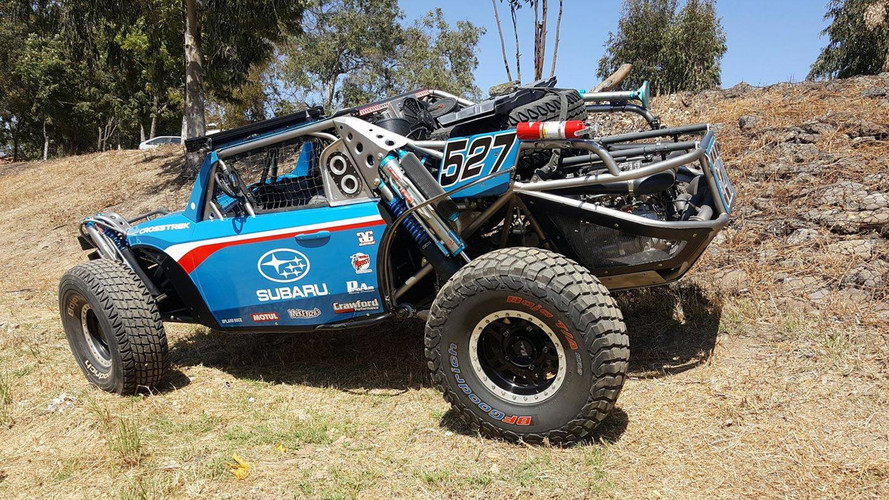 This beast is a Crosstrek name only. It retains a Subaru Boxer engine, in this case tuned by Crawford Performance. Gargantuan shocks sit at each corner to soak up the bumps, and the body amounts only to what is absolutely necessary.

“I am excited to showcase the capabilities of this vehicle, the Subaru Boxer engine platform and our team. We are here to turn some heads and continue to prove the viability of the Subaru platform in off-road racing,” Quirt Crawford said.

The Baja 500 ran for 515 miles (829 kilometers) in a loop beginning and ending in Ensenada, Mexico. While the event wasn’t a success, the team has already pledged to try again. The off-road Crosstrek will race in more desert events this year, including the 50th running of the Baja 1,000 in November.

Putting a Crosstrek-branded buggy onto the desert trails serves as a way for Subaru to promote the new second-generation model arriving at dealers this summer. The brand’s latest compact crossover rides on the modular Subaru Global Platform, and the company’s 2.0-liter flat four-cylinder engine now produces 152 horsepower (113 kilowatts), versus 148 hp (110 kW) previously. While a six-speed manual is the standard transmission, expect most of them on the road to come with a CVT. As a Subie, the Crosstrek naturally comes with all-wheel drive as a standard feature.

Cherry Hill, N.J. -  Subaru of America, in conjunction with Grabowski Brothers Racing and Crawford Performance, debuted today their Subaru Crosstrek powered desert racer, which will compete in this weekend’s historic 49th running of the SCORE Baja 500 in Ensenada, BC Mexico.

The car will be piloted by the Grabowski brothers, Dusty and Parker age 20 and 24 respectively. Hailing from Upland, California, Dusty and Parker have won multiple championships in short course racing and are looking to their rookie attempt at the Baja 500. If successful, this will be the first second generation win for the Grabowski family.

Utilizing a Subaru BOXER engine built by engine designer and famed race car builder Quirt Crawford, the Class 5 race car will be put to the test at one of the most legendary and challenging desert race events in North America. As a test prior to the Baja 500, the team entered the McKenzie’s 250 race in Lucerne, CA, where they won their class by over one hour.

“Subaru has historically competed in off-pavement racing like stage rally and rallycross, so putting this Crosstrek to the test in desert racing will once again show our fans the performance and durability of the Subaru BOXER engine, stated Subaru Motorsports Marketing Manager Rob Weir. “We’re excited to be involved with Grabowski Bros racing, and be entered in the Baja 500.”

“I am excited to showcase the capabilities of this vehicle, the Subaru BOXER engine platform and our team. We are here to turn some heads and continue to prove the viability of the Subaru platform in off-road racing,” stated Quirt Crawford.

“We are thrilled to be racing the Subaru Crosstrek in the Baja 500. It’s a tough race to just get a finish, but we are here to win! I can’t wait to get in the race car and start the race!” stated an enthusiastic Dusty Grabowski.

The Baja 500 begins at 10:00 a.m. PST Saturday June 3 and runs through the upper area of Mexico’s Baja California Peninsula. The grueling off-road race is a 515 mile loop race that starts and finishes downtown Ensenada, Baja California, Mexico. Both Subaru of America and the Baja 1000 are celebrating their 50th anniversaries this year which the Crawford Performance team will tackle later this year.

The Baja 500 begins at 10:00 a.m. Saturday June 3 and runs through the upper area of Mexico’s Baja California Peninsula. The race is a 516 mile loop race that start and finish in Ensenada, Baja Mexico. The team will enter additional desert racing events this season, to be announced. Both Subaru of America and the Baja 1000 are celebrating their 50th anniversaries this year.