Apple Fights Distracted Driving With Automatic "Do Not Disturb" Mode 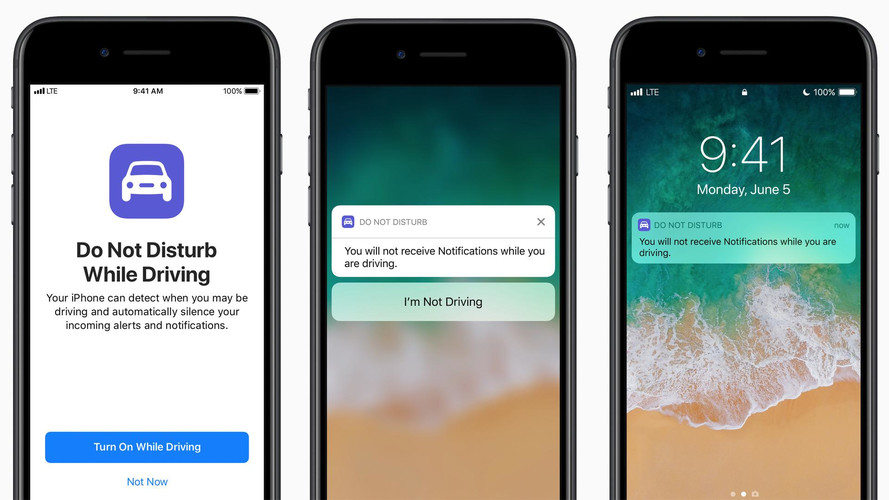 Your iPhone will automatically mute incoming alerts when it detects you’re behind the wheel.

Find it all too tempting to check your text messages, Facebook updates, or Snapchats while behind the wheel? Apple wants to help curb your addiction with a new feature bearing the incredibly awkward name, “Do Not Disturb While Driving.”

Announced today at Apple’s Worldwide Developers Conference, Do Not Disturb While Driving (DNDWD) will launch this fall as part of iOS 11 for the iPhone and iPad. The mode activates when the phone detects that its owner is in a car – and is not using Apple CarPlay – and will mute any incoming notifications. It can even send automated text-message replies explaining that the phone’s user is driving.

iOS 11 will launch as a free update this fall for the iPhone 5s and newer.

The National Highway Traffic Safety Administration says that distracted driving caused 3,477 road deaths in 2015, so any app that can help keep drivers’ eyes on the road instead of on the screen is a welcome feature.

Of course, don’t forget that it’s already possible to put your phone on silent and ignore it while you’re behind the wheel. And using Apple CarPlay or Android Auto in a car so equipped can allow drivers to interact with their phones by way of voice commands. But if you absolutely cannot quit your smartphone addiction while on the road, and can’t wait for DNDWD to launch, perhaps Nissan’s concept Faraday cage is the solution you need.

San Jose, California — Apple today previewed iOS 11, a major update to the world’s most advanced mobile operating system, bringing new experiences and hundreds of features to iPhone and iPad this fall. iOS 11 is the biggest software release ever for iPad, with powerful multitasking features, the Files app and more ways to use Apple Pencil. Augmented reality is coming to hundreds of millions of iOS devices with a new platform for developers to build apps that let users place virtual content on top of real-world scenes. CoreML gives developers on-device machine learning capabilities so they can easily make apps that will predict, learn and become more intelligent. Additional features include the ability to pay friends using Apple Pay, Do Not Disturb while driving to help users stay more focused on the road, even more intelligence and a new voice for Siri and new professional capabilities to Photos and Camera. iOS 11 is available as a developer preview today and will be a free software update for iPhone and iPad this fall.

“With iOS 11, we’re delivering the biggest AR platform in the world, and it’s available today for developers to begin building AR experiences using ARKit for hundreds of millions of iPhone and iPad users,” said Craig Federighi, Apple’s senior vice president of Software Engineering. “iOS 11 gives iPad users the powerful app functionality they need to take advantage of everything iPad is capable of, and brings hundreds of new features and incredible updates to the iOS apps iPhone and iPad users enjoy every day.”

iOS 11 is the biggest release ever for iPad.

iOS 11 makes multitasking on iPad even more powerful with a new customizable Dock that provides quick access to frequently used apps and documents from any screen, and a redesigned app switcher makes it easier to move between pairs of active apps, used in Split View and now Slide Over. The new Files app keeps everything in one place, whether files are stored locally, in iCloud Drive or across other providers like Box, Dropbox and more, and with Drag and Drop available across the system, moving images and text is easier than ever. Apple Pencil is more deeply integrated into iPad with support for inline drawing and a new Instant Notes feature opens Notes from the Lock Screen by simply tapping Apple Pencil on the display.

AR Experiences for iPhone and iPad

ARKit makes it easy for developers to create new experiences for iPhone and iPad.

Siri Is Even More Useful and More Natural

Siri is the most popular personal assistant in the world with more than 375 million active devices accessing Siri each month across 36 countries. Using the latest advancements in machine learning and artificial intelligence, new male and female voices are more natural and expressive, adjusting intonation, pitch, emphasis and tempo while speaking, and can translate English words and phrases into Chinese, French, German, Italian or Spanish. Siri extends beyond voice, using on-device learning to deliver more personal experiences and offers suggestions based on personal usage of Safari, News, Mail, Messages and more. For example, as Siri learns topics or places a user is interested in while browsing Safari, they will be suggested when typing in Mail, Messages and other apps.

With iOS 11, Portrait Mode images can be taken with optical image stabilization, True Tone flash and HDR, so every shot looks even more professional. Live Photos are more expressive with new Loop and Bounce effects that create continuous video loops, while Long Exposure can capture time and movement. In Photos, Memory movies are optimized to play in both portrait and landscape orientation, and more memories, such as photos of pets or birthdays, are automatically created. With iOS 11, Apple introduces a new technology called High Efficiency Image File Format (HEIF) that reduces the file size of every photo taken with iPhone 7 and iPhone 7 Plus.

Paying friends and family is quick, easy and secure with Apple Pay in Messages.

Apple Pay users will be able to make and receive payments with friends and family quickly, easily and securely. They can send money and get paid right in Messages, or tell Siri to pay someone, using the credit and debit cards they already have in Wallet. When users get paid, they receive the money in their new Apple Pay Cash account. They can use the money instantly to send to someone, make purchases using Apple Pay in stores, apps and on the web, or transfer it from Apple Pay Cash to their bank account.

iOS 11 introduces a new way to help drivers stay more focused on the road with Do Not Disturb while driving. iPhone can detect when you may be driving and automatically silence notifications to keep the screen dark. Users have the option of sending an auto reply to contacts listed in Favorites to let them know they are driving and cannot respond until they arrive at their destination.