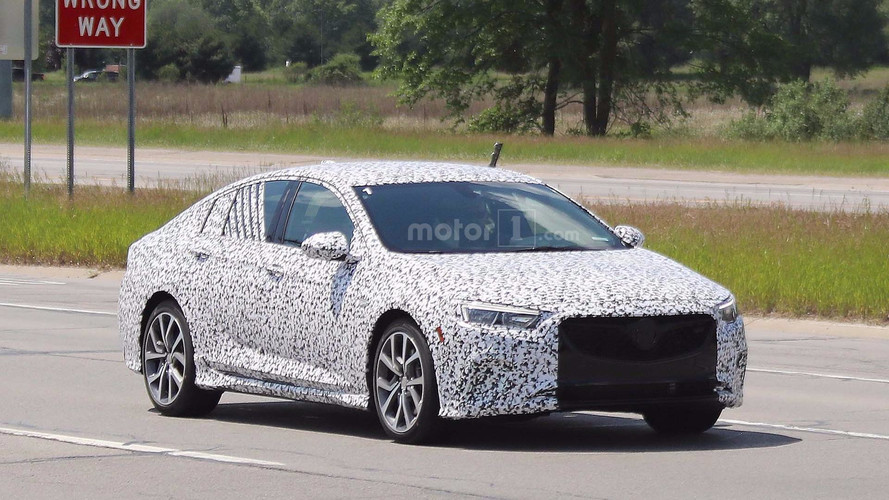 The world has already seen the revamped 2018 Buick Regal, and thanks to a slip up courtesy of Buick’s promo website in Canada earlier this year, we’ve also received some leaked information for the high-performance GS edition. It isn’t yet known if the GS will debut this fall as a 2018 model, or sometime next year as a 2019 add-on, but when it does arrive, it will most likely be all-wheel drive with the same 3.6-liter V6 found in the Chevrolet Camaro.

In that application the engine makes 335 horsepower, which would certainly be quite a jump from the 259 horsepower found in the current GS. At the very least we expect the engine to produce 310 ponies – the same amount currently found in the Buick LaCrosse. The transmission could be an eight-speed dual-clutch automatic versus the nine-speed auto slated for the front-wheel drive models.

As with the main Regal line, the GS promises to be a five-door Sportback. From the spy photos we see trapezoid exhaust outlets integrated into the rear bumper as well as side sills similar to the forthcoming Regal TourX wagon. The exposed grille is deliciously dark with what appears to be a mesh pattern versus the standard Regal’s vertical bar design. It’s hard to say if the blacked-out chrome will stay that way on the production model, but a certain amount of dechroming is to be expected.

The Gran Sport moniker is a storied performance mark for the Buick brand, going all the way back to the original muscle car era with cars like the Skylark, GS 455, and GSX. Absent through the Grand National era of the 1980s, the GS returned to Buick with the redesigned front-wheel drive Regal in 1988. It wasn't until the supercharged Regal GS from 1997 through 2004, however, that legitimate performance returned to the mark.

If the newest Regal GS does indeed offer 335 horsepower with all-wheel drive, it should be quite a performer worthy of the GS legacy.