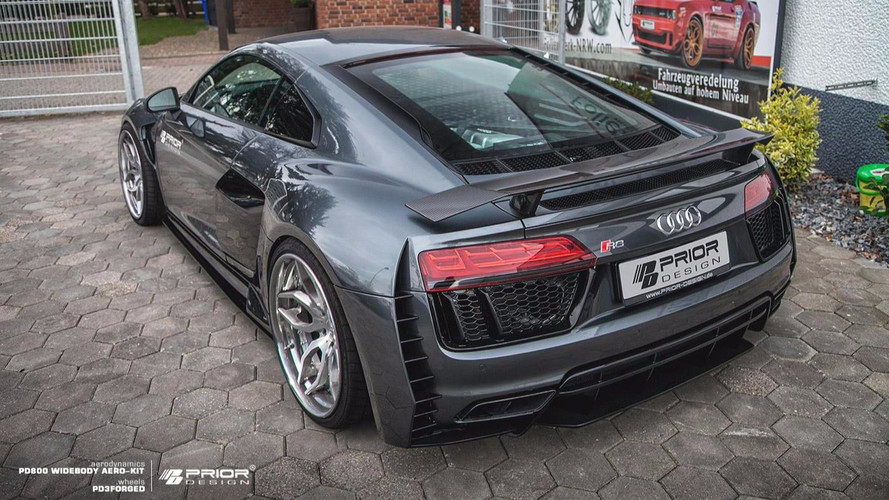 A bit too much or just the right amount?

Ingolstadt’s second-generation supercar has been around since 2015 with an evolutionary design heavily based on the original R8 launched a decade ago. For those who feel like the mid-engine machine is in need of a refresh, the aftermarket specialists from Prior Design have come up with a rather in-your-face styling package.

The tuner dials the aggressiveness up a notch by giving the R8 one of the widest rear ends ever seen on Audi’s V10 beast thanks to bulging fenders joined by an equally fat bumper hosting numerous vents stacked on top of each other. The menacing look is enhanced by a prominent rear diffuser that sticks out to let everyone know it’s not a run-of-the-mill R8.

Check out Prior's work on the first-gen R8:

Besides working on the supercar’s derrière, Prior Design also tweaked the side skirts by giving them a pair of air vents. Speaking of which, more vents have been built into the beefier front fenders and the redesigned front bumper now featuring an add-on lip spoiler. Rounding off the wide body kit is the modified front hood with a glossy black piece of trim.

Here's a photo comparison between Prior Design's R8 (left) and the 2017 Audi R8 V10 Plus Exclusive Edition (right):

All of these bits and pieces are made from a fiberglass-Duraflex mixture and can be complemented by a slew of other upgrades for deep-pocketed customers willing to go all out. Goodies such as 20-inch wheels, suspension kits, and exhaust systems are all available, along with plenty of interior cabin customizations.

As a refresher, Audi Sport’s supercar can be had for the time being strictly with a naturally aspirated 5.2-liter V10 engine. A new base version is expected to arrive in the years to come and it will allegedly employ the same biturbo 2.9-liter V6 found in the latest RS5 models. The smaller engine will obviously drive down the model’s starting price, which for now stands at $162,900 in the case of the coupe and from $175,100 for the droptop.

Gallery: Audi R8 by Prior Design