Lamborghini Celebrates Milestone Of 8,000 Huracáns Off The Line 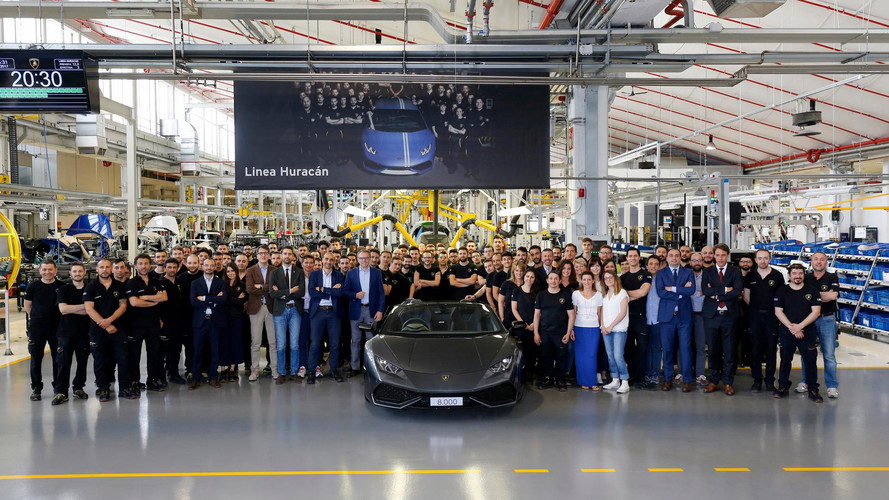 The 8,000th vehicle is a Huracán Spyder in Grigio Lynx gray. It will go to a customer in the United Kingdom.

Just three years after the supercar’s introduction, Lamborghini is celebrating the 8,000th example of the Huracán coming off the assembly line in Sant'Agata Bolognese.

Huracán customers have plenty of choices when deciding which variant of the supercar to buy. With its all-wheel-system and hardtop, the LP 610-4 is a model that an intrepid driver could enjoy in every season. More traditional folks can opt for the rear-wheel drive 580-2, and the Spyder models are the perfect choice for someone who wants to drop the top for open-air driving at high speed.

The current range-topper in the lineup is the Huracán Performante. It features a 5.2-liter V10 with 630 horsepower (470 kilowatts) and 443 pound-feet (600 newton-meters) of torque. A seven-speed dual-clutch gearbox routes power an all-wheel-drive system. To further maximize grip, the model uses the new Aereodinamica Lamborghini Attiva (ALA) active aerodynamic system. Spy shots show that a droptop variant is one the way soon, too.

At this rate, the Huracán is more than halfway to beating the 14,022 examples of the Gallardo on the road, which makes it Lambo’s most prolific model ever. The Huracán is already quite a success by the Italian supercar maker’s standards, though. For example, the company managed to produce 4,099 units of the Murciélago. In 2016, Lambo celebrated the 5,000th Aventador leaving Sant'Agata Bolognese, so it hasn’t come close to beating the Huracán yet.

Lambos could become a more common sight on the street soon because the company expects the upcoming Urus performance crossover to double the firm’s annual production volume. The CUV will reportedly carry a price around $200,000 and will initially come with a 650-hp (485 kW) biturbo V8. A plug-in hybrid will join the lineup later.

Sant’Agata Bolognese, 1 June 2017 – The Lamborghini Huracán achieved an important milestone in its history, with 8.000 units produced.