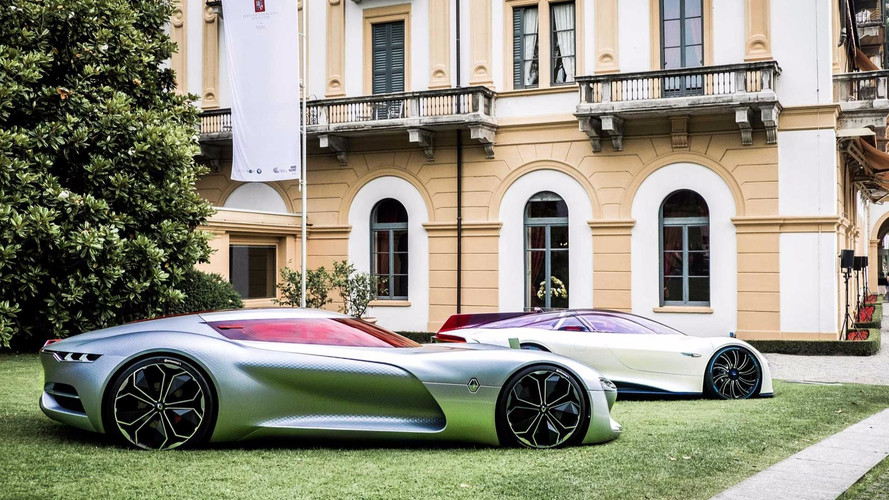 This sexy shape can also hit 60 miles per hour in under four seconds.

It’s been nearly 30 years since Renault offered a car in the United States, and the few models that did make the cut were rather forgettable. If any of them had looked even remotely like the stunning Trezor concept, however, it’s a fair bet the manufacturer would’ve never left in the first place.

The long, low, and sleek Trezor looks so good in fact, that it was crowned as the most beautiful concept car at Italy’s prestigious Concorso d’ Eleganza Villa d’Este. It’s one of the oldest car events in the world, dating back to 1929 and we must admit, the Trezor is a very proper companion for the picturesque shores of Northern Italy’s Lake Como. What makes the Trezor even more impressive is that it’s a working vehicle – a requirement to compete at the event.

We were introduced to the all-electric concept and it’s glorious one-piece clamshell roof last year at the Paris Motor Show. The two-seater’s curvaceous styling features a muscular stance thanks to beefy fender arches that contain 21-inch wheels in front, 22-inch in back. Its powertrain is derived from the manufacturer’s Formula E race car, generating 350 electric horsepower that turns the rear wheels. In full gallop, the Trezor can sprint to 60 miles per hour in less than four seconds.

This isn’t the first award Renault has received for its efforts on the Trezor. Back in March it was named the 2016 Concept Car Design of the Year by a panel of 20 renowned car designers. The award was presented to Renault at the 2017 Geneva Motor Show.

The Trezor is only a concept, and a fairly radical one at that so we’ll almost certainly never see it enter production. Still, if this is a sign of what’s to come from Renault, it’s high time the manufacturer made a triumphant return to U.S. shores.

The prestigious Concorso d’Eleganza Villa d’Este has been held since 1929 on the shores of Lake Como in Italy. The annual event attracts car enthusiasts and collectors who come from across the world to celebrate automobiles as precious and timeless works of art.

To enter in the prototypes and concept cars category, TreZor had to meet a set of rigorous selection criteria as a working concept car with high-quality and original styling. TreZor ticked all the boxes. The concept car showcases the design cues of future Renault models and is powered by an all-electric motor derived from the world of Formula E with maximum power of 260kW (350hp) and peak torque of 380Nm.

Stéphane Janin, Renault’s Director of Concept Car Design, commented: “This award testifies to the fine judgment of great car collectors, who consider automobiles to be works of art. It recognises the work of our designers who were part of this fantastic project.”.