Roll With The Whole Family In This Mercury Grand Marquis 5.0 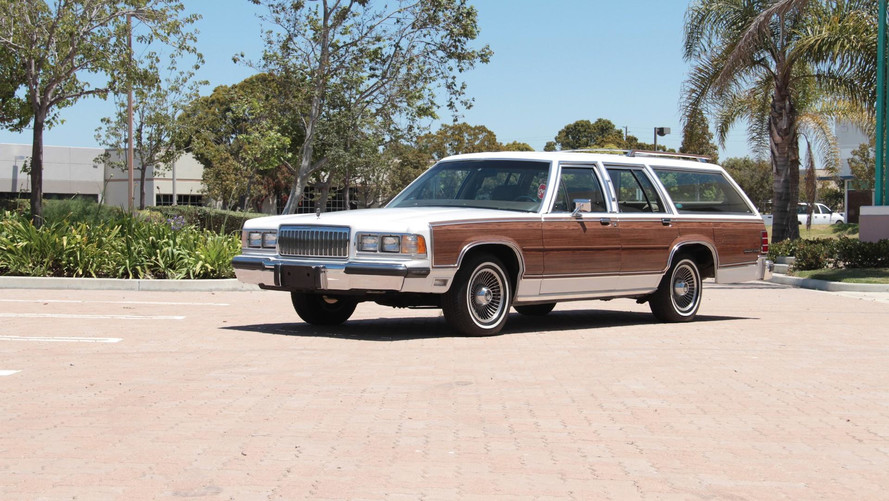 Ready for summer vacation, kids? If so, then you might want to convince your dad to pick up this surprisingly clean 1989 Mercury Grand Marquis. The handsome wagon will cross the auction block next month as part of the RM Sotheby’s Santa Monica sale where it’s estimated to go anywhere between $10,000 and $15,000.

Under the hood is Ford's infamous 5.0-liter Windsor V8, in this application producing as much as 150 horsepower (97 kilowatts) and 270 pound-feet (370 Newton meters) of torque. It was purchased new from Woodland Hills Lincoln-Mercury in 1989, and has driven just 23,000 miles (37,014 kilometers) in more than 28 years on the road. The car spent most of its life in Arizona and California – its most recent owner keeping it in a private collection for a number of years.

This example is a fully loaded LS Colony Park, and and comes with working power windows, door locks, mirrors, cruise control, air conditioning with auto climate control, AM/FM radio, and even a cassette player (technology!). The cabin is covered in beige leather and lacquered wood, per any good '80s station wagon, and has room enough for nine with the sweet jump seat in the back.

The exterior is in surprisingly good condition, too. The white paint job and appropriate wood paneling have been well maintained, while the original wheels, tires, headlights, taillights, and badging remains. The two-way tailgate is in working order, with the ability to open horizontally or fold down flat.

This wonderful wagon will cross the auction block on Saturday, June 24, 2017 at the RM Sotheby’s Santa Monica sale taking place at the historic Barker Hangar. Apart from the Grand Marquis in question, a number of other unique vehicles will be in attendance, including this stunning 1960 Mercedes 300SL Roadster.

In the late ‘80s when Ford, General Motors, and Chrysler were all vying to dominate the full-sized segment for the American Market, the Colony Park was the top of the line Mercury Wagon for 1989. Offered in two trim levels, the Grand Marquis could either purchased as a basic GS wagon or the highly-optioned LS. If its Mercury's sister company Lincoln had produced a Continental Wagon, the LS would have been its rival in terms of specifications and luxury.

This is an unrestored original example that has the odometer displaying 23,000 miles. It has been both an Arizona and California car its whole life. Its current Southern California owner has kept it in a private collection for many years and has recently underwent a full brake service.