2019 Audi A7 Test Car Spied Breathing Fire In The Alps 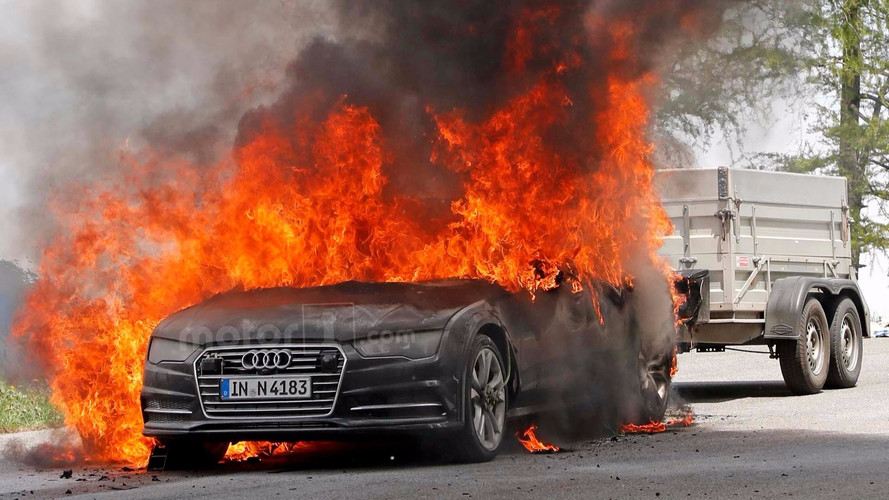 The prototype couldn’t have picked a prettier place to burn itself to the ground.

Car fans of the world generally look with envy at manufacturer prototypes and those who get to drive them. Who wouldn’t want to be on the road or a race track putting a secret car through its paces? What people fail to realize is these test cars are called test cars for a reason. The testing process inevitably reveals issues and flaws, and sometimes that occurs with dramatic, catastrophic results.

That’s exactly what happened with this 2019 Audi A7 test car as it chugged through the Austrian Alps pulling a dead weight trailer. A fire of unknown origin broke out underhood near the firewall and quickly spread. Fortunately the driver was able to pull over on what appears to be a paved lookout section of the highway, well clear of the road. Nobody was injured, and though roadside assistance was on the scene rather quickly with a fire extinguisher, it obviously wasn’t enough to keep this Audi from completely – and we mean completely – going up in flames.

By the time the fire department arrived on the scene the Audi wasn’t even visible through the wall of fire, and when the flames were doused only the Sportback’s skeleton remained. It’s safe to say this mule is a total loss but hey, at least the fire took place on a particularly scenic stretch through the Alps.

The new A7 Sportback will ride on the MLB Evo platform already in use with Audi’s new Q7 sport-utility vehicle. The design is much lighter than the A7’s current arrangement, which should give the suave cruiser added performance in all aspects, not to mention a bump in fuel economy. We expect Audi to officially unveil the new A7 either this fall or early next year.