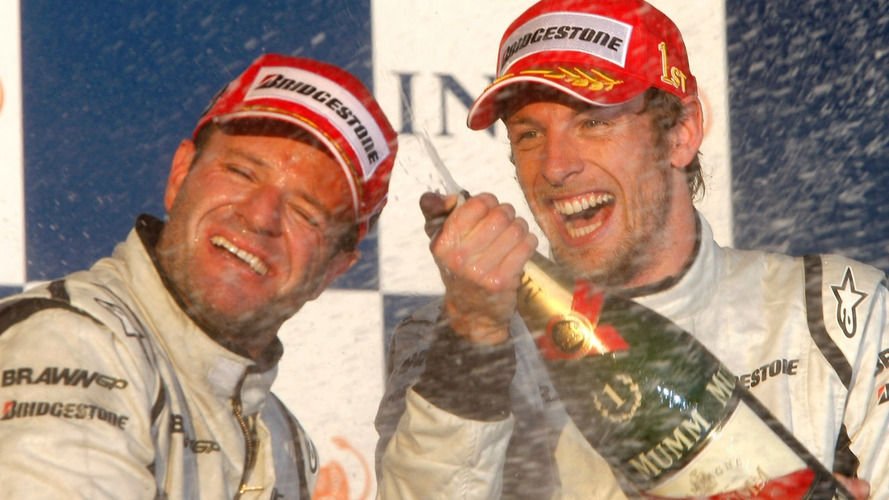 The Briton, after two awful seasons for the Brackley team's previous guise Honda, crossed the line less than a second ahead of his teammate Rubens Barrichello, after a one-corner sprint to the finish following a safety car.

The 2009 championship opener on Sunday lived up to its pre-season hype, with Jenson Button leading an eventful Brawn one-two at Albert Park.

The Briton, after two awful seasons for the Brackley team's previous guise Honda, crossed the line less than a second ahead of his teammate Rubens Barrichello, after a one-corner sprint to the finish following a safety car.

The safety car was required after Sebastian Vettel and Robert Kubica, fighting hard for second place, tangled mere laps from the chequered flag.

"I think he could have left me some more room," BMW's Kubica, who had subsequently slammed hard into the turn 5 barriers after losing a wing under the car, told reporters behind the pitlane.

Vettel attempted to power his badly damaged car around the track under the safety car for the remaining few laps, ignoring requests to pull over until the penultimate lap. A decision the German was left to rue as race stewards subsequently handed him a $50,000 fine and a 10 place grid penalty for the Malaysian Grand Prix next week.

The clash between Vettel and Kubica gifted the second step on the podium to Barrichello, who had a race of incidents, including nearly stalling at the start, triggering a first-corner crash, and later shedding some more front wing by tagging the rear of a Ferrari.

Jarno Trulli completed the podium despite starting from the pitlane following the 'flexi wing' disqualification of Saturday, ahead of a surprised world champion Lewis Hamilton.

However this podium finish was short lived. Following a stewards' inquiry,Trulli was been stripped of his podium finish after officials ruled that the Toyota driver overtook Lewis Hamilton under the safety car, after losing third position to the world champion by running off the track.

Italian Trulli received a 25 second time penalty, dropping him out of the points. McLaren's Hamilton was promoted to third, with Sebastien Bourdais joining the points-paying positions.

"Our car is what it is at the moment, but if anyone can turn it around quite quickly, it is us," the McLaren driver, one of only a few to stay out of trouble on Sunday, said in the paddock.

2009's only rookie, Sebastien Buemi, attracted some criticism this weekend for being promoted by Red Bull ahead of arguably more qualified GP2 drivers, but performed strongly to finish ahead of his teammate Sebastien Bourdais for a debut point.

Local driver Mark Webber was bitterly disappointed to finish a lap down and last. "It wasn't really embarrassing," said the Australian, who nursed a damaged car through 57 laps after early contact with Barrichello, "but a real shame as I wanted to do something for the fans here."

Ferrari kicked off its 2009 campaign with a disastrous nil points: Kimi Raikkonen spinning into a concrete wall and later retiring, while Felipe Massa also ended up in the garage with a failed F60.

* Trulli given 25 Second Penalty for overtaking under safety car