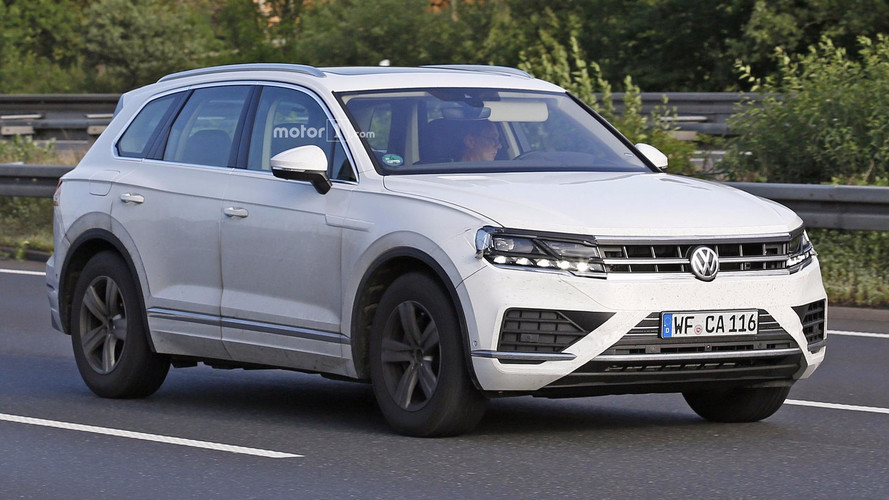 Volkswagen might not have the most exciting designs in the business, but the peeps from Wolfsburg have taken a step in the right direction with the new Arteon. While it’s not all that different compared to the CC before it, the new flagship model in VW’s range does bring a breath of fresh air with its — dare we say — stylish body. Spy shots of the all-new Touareg have shown the front fascia will get a similar look, with the headlights continuing on the grille, so there is hope for the luxury SUV that it will eschew the outgoing model’s blandness for something a bit more exciting.

Seen here is a near-production prototype that frankly looks a lot like the Touareg on sale today. However, the test vehicle still has plenty of thin strips of white camouflage to hide the real metal. You can see disguise on the front fascia around the headlights and on the lower half of the grille. In addition, the piece of trim on the sides is also hidden, while at the back there are stickers on the taillights to make them look as if they were taken from the current model. Between the clusters is another strip of body-colored camouflage. We are pleased to report the dual exhaust tips are real, not like on the Audi SQ5 or other more expensive cars.

Once the disguise will come off, the third-generation Touareg will look a lot like the T-Prime concept introduced a little over a year ago:

Riding on the VW Group’s MLB Evo platform like the Audi Q7, the new posh SUV will hit the assembly line at the factory in Bratislava, Slovakia in November. That means we will likely get to see it in the metal at the Frankfurt Motor Show two months earlier, although an online reveal could occur even sooner than that.