Toyota TJ Cruiser Trademark Filing Might Be For New Crossover

If it will become a badge on a production car, it could be a compact model with true off-road capabilities.

Back in October last year, Toyota registered the “FT-4X” moniker with the United States Patent and Trademark Office and used it for a concept unveiled this past April at the 2017 New York Auto Show. Fast forward to May 25, a new registration was made with the same USPTO, but this time for “TJ Cruiser.” It’s too early to say whether there is in fact a connection between the two, but at least it’s worth pointing out the newly registered nameplate seems more suitable for a production model rather than a concept as it was the case with the FT-4X. The latter received its name after “Future Toyota Four-Wheel Drive.”

One could speculate Toyota is cooking up a new compact crossover with true off-road chops to position alongside the funky C-HR. To increases the chances of success, the Japanese marque could bank on the FJ Cruiser’s popularity but use “TJ” instead as a way to avoid upsetting fans of the defunct model since the new crossover would not be a direct successor. 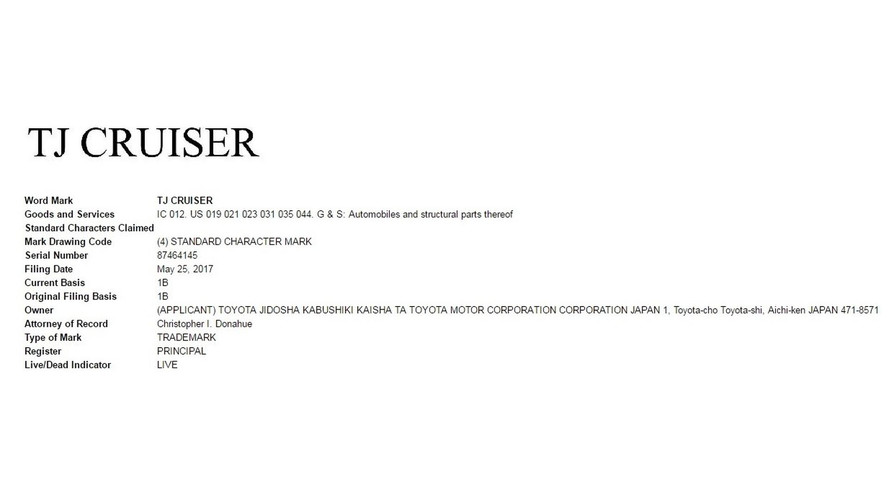 The Toyota TJ Cruiser would likely ride on the TNGA platform already underpinning the latest Prius, Camry, and the aforementioned C-HR. Even if it will not be able to rekindle the magic that made the FJ Cruiser so appreciated, it will still be a breath of fresh air in the hugely competitive crossover segment if it will be closely related to the FT-4X concept pictured here.

As a refresher, Toyota envisioned the boxy showcar from New York with a four-cylinder engine and a four-wheel-drive system featuring selectable low-range, so expect the same setup for the road-going model, if there is actually going to be one some years from now.