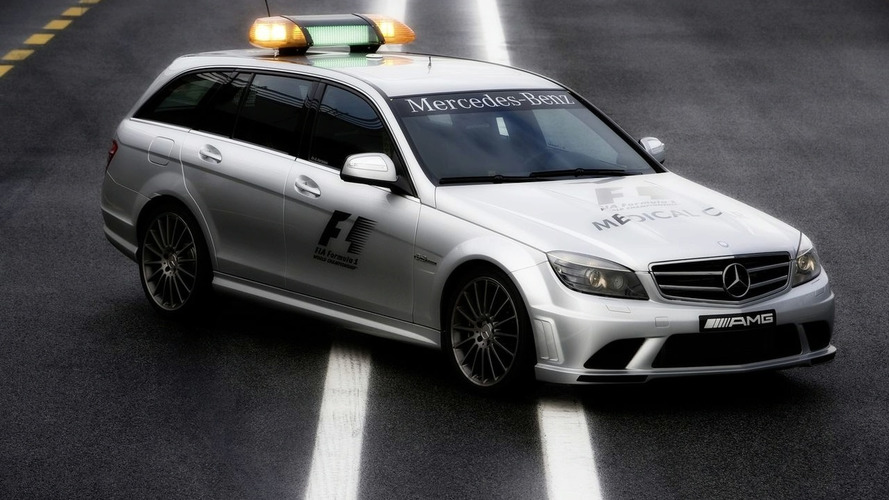 Mercedes has announced that once again their SL 63 AMG and C 63 AMG Estate will become the official safety and medical cars for the 2009 Formula One season.

Mercedes has announced that once again their SL 63 AMG and C 63 AMG Estate will become the official safety and medical cars for the 2009 Formula One season.

The SL 63 AMG safety car will be piloted by former DTM driver Bernd Mayländer and under instruction from race management, Bernd will guide the world's fastest racing drivers around the circuit. Since he will be leading hype-sensitive racing cars that can overheat and lose traction at low speeds, the SL 63 AMG was chosen for its powerful 386 kW (525 hp) 6.3-liter (6208 cc) V8 engine that allows the car to run from 0-100 km/h in just 4.4 seconds.

Despite the SL's already legendary performance, several changes were made in order to ensure the safety car can live up to its demanding objective. Among the modifications is a new AMG sport exhaust system which allows for better engine breathing, a newly developed AMGSPEEDSHIFT MCT 7-speed transmission that can change gears in just 100 milliseconds, and a revised coil-over suspension which can be customized for each individual race track that the car will be driven on. To endure the high temperatures that racing duty requires, Mercedes equipped the SL with additional cooling systems and designed special 19-inch extra-light AMG wheels that optimize cooling of the car's high-performance composite braking system.

The company also went to great lengths to reduce weight which is highlighted by the fact that the safety car weighs 220 kilograms less than the SL 63 AMG production car despite the addition of all the high-performance modifications. To boast a total weight of 1750 kilograms, Mercedes ditched the SL's folding metal roof and used carbon-fibre-reinforced plastic on the engine bonnet, front and rear aprons, front wings and luggage compartment lid. Even the interior gets gutted of its luxurious appointments as it instead features twin AMG sports seats, two center console mounted video monitors for viewing race conditions, and a two-way radio system for communication with race management.

For a medical car, Mercedes once again decided to use the C 63 AMG Estate which features a 6.3-liter (6208 cc) V8 engine that produces 336 kW (457 hp) and 600 Nm of torque. Like the safety car, the medical car also receives a new sport exhaust system, optimized cooling systems, and a composite braking system. Driven by Alan van de Merwe and co-driver Dr. Gary Hartstein, the wagon features room for two medical assistants and all their emergency equipment.